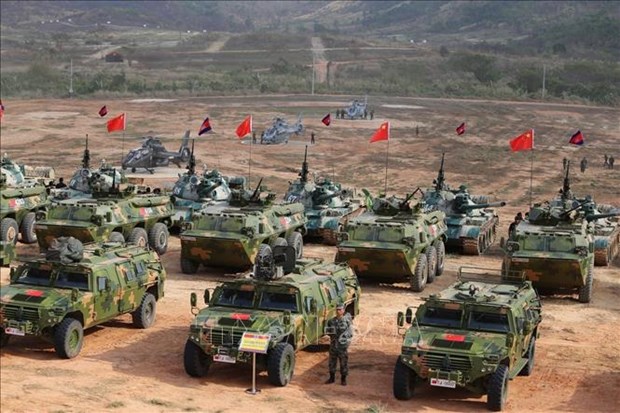 Phnom Penh (VNA) – Cambodia and China plan to resume their largest annual joint military exercise, dubbed "Golden Dragon", next year after a suspension over the past two years due to serious floods and the COVID-19 pandemic.

Cambodia's Khmer Times reported that during a four-day visit to China which concluded on August 16, Cambodian Minister of Defence General Tea Banh and General Xu Qiliang, vice-chairman of the Central Military Commission, co-chaired a meeting on military cooperation between the two counties in Guangdong province.

The two sides discussed collaboration across areas, including the resumption of joint military exercises.

The " Golden Dragon " military exercise, which began in 2016, aims to exchange experience and enhance the capacity of the Royal Cambodian Armed Forces (RCAF) and the Chinese People's Liberation Army (PLA) in humanitarian operations, disaster rescue and counter-terrorism in the UN framework in accordance with the cooperation between both countries' defence ministries.

Its most recent edition took place in Cambodia in 2020 with the participation of 2,542 Cambodian and 252 Chinese troops.

Last year, the drill was postponed as Cambodian soldiers were mobilised in the response to the pandemic and floods in several provinces. The pandemic continues to disrupt the joint military exercise this year./.

Cambodia, China to resume ‘Golden Dragon’ military drill in 2023 have 334 words, post on en.vietnamplus.vn at August 19, 2022. This is cached page on VietNam Breaking News. If you want remove this page, please contact us.