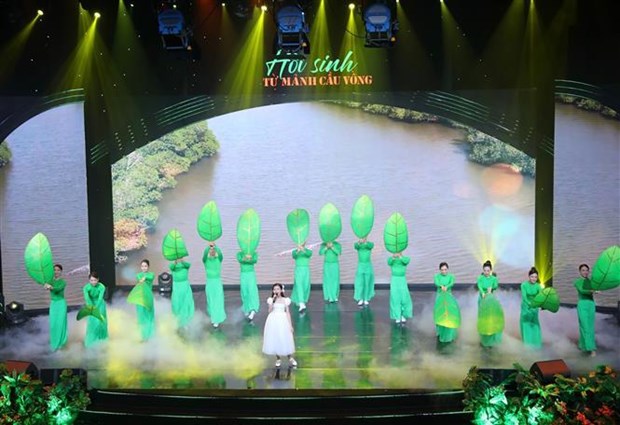 Hanoi (VNA) – An art programme on AO/dioxin disaster and efforts to address its consequences took place in Hanoi on August 10 on the occasion of the 61st anniversary of the disaster in Vietnam.

It featured art performances, reportages, and exchanges with domestic and international individuals who have made contributions to the remediation of the hazardous chemical and support for AO victims .

The event aimed to raise public awareness on the matters and honour victims who have made great efforts to overcome harsh circumstances as well as individuals and organisations in Vietnam and abroad with significant contributions to the alleviation of the disaster consequences.

President of the Vietnam Association of Victims of Agent Orange (AO)/dioxin (VAVA) Nguyen Van Rinh said the Party and State have paid attention to difficulties facing the victims and issued many policies to assist them.

Every year, dozens of trillion VND is spent on helping revolutionary contributors, resistance fighters infected with toxic chemicals, and their children and grandchildren suffering from AO consequences, he noted.

Concerted efforts from the society in aid of the victims are needed, Rinh said, calling on the US Government and people as well as international organisations to further support Vietnam in its efforts toward related chemical remediation and pain relief.

According to VAVA , the US army sprayed 80 million litres of toxic chemicals on the south of Vietnam between 1961 and 1971, with 61% being AO containing 366kg of dioxin, on over nearly 3.06 million hectares (equivalent to nearly one quarter of the south's total area).

Preliminary statistics showed that 4.8 million Vietnamese people were exposed to AO/dioxin, and about 3 million people became victims. Tens of thousands of people have died while millions of others have suffered from cancer and other incurable diseases as a result. Many of their offsprings also suffer from birth deformities./.

Art programme raises awareness on AO/dioxin disaster in Vietnam have 413 words, post on en.vietnamplus.vn at August 11, 2022. This is cached page on VietNam Breaking News. If you want remove this page, please contact us.