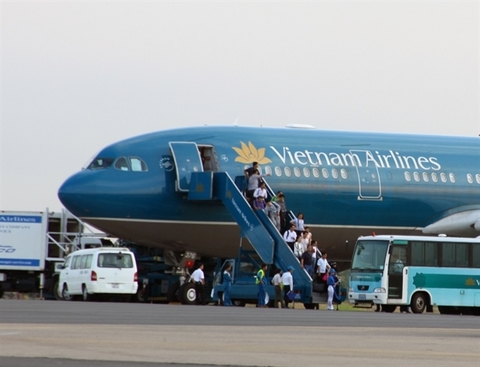 As of increasing passengers in July, 41 flights are cancelled due to technical factors and late flights. The on-time rate of flights was only 81 per cent out of the total of more than 33,200 flights. — Photo cafef.vn

The number of air passengers reached nearly 12 million, an increase of more than 40 per cent in July compared to pre-COVID, said the Civil Aviation Administration of Viet Nam (CAAV).

Along with a sharp increase in the number of passengers, flight cancellations and delays also increased rapidly, partly due to subjective errors from airlines, adding the local airports served, of which domestic passengers flew more than 10.5 million times, an increase of nearly 6 per cent compared to June.

CAAV said flight delays and cancellations in the past month had increased dramatically many times, causing frustration in public and affecting the quality of aviation services.

The matter was partly due to many bottlenecks in the airport infrastructure and unusual weather, said CAAV.

In the past month, the proportion of delayed flights accounted for more than 18 per cent of the total number of licensed flights or more than 6,000 flights, an increase of 16 per cent over the same period last year and equivalent to June.

During the month, 41 flights were cancelled due to technical factors and late flights. In July, the on-time rate of flights was only 81 per cent out of the total of more than 33,200 flights.

CAAV has just asked units and airlines to implement practical solutions to reduce the number of delayed and cancelled flights.

At the same time, CAAV required the arrangement and narrowing of the non-aviation counter to maximise the space for flight operations and passengers, especially at large airport terminals such as Tan Son Nhat and Noi Bai airports.

For airlines, the authorities requested an increase in night flights to reduce pressure on airports during daytime hours and to arrange aircraft, equipment and backup supplies for timely maintenance and repair.

In particular, airlines must arrange representatives to handle questions and complaints of passengers at airports regularly to promptly address any issues arising.

Airport authorities must strengthen inspection and supervision of aviation security, safety and quality to promptly handle violations, especially airlines’ obligations to passengers when there is a problem of cancelled flights or prolonged delays.

Thanks to the sharp increase in the number of air passengers during the summer peak this year, the business results of Vietnamese airlines have gradually improved.

Although Vietnam Airlines’ business results in the second quarter and first half of this year still suffered losses, the losses were reduced by more than 40 per cent compared to the same period last year and in the first quarter.

In the second quarter of 2022, the airline had consolidated losses of VND2.5 trillion. In the year’s first half, the total loss was more than VND4.6 trillion.

In July, the airline recorded a profit from passenger transport thanks to the “exploding” domestic passenger volume and forecasts that August’s business results would continue to be positive with the peak summer season still going.

Vietnamese airlines are still facing many difficulties, the international flight market has not recovered as planned, and the impact of the Russia-Ukraine conflict, and tensions in the Taiwan Strait are causing issues.

In particular, the high price of jet fuel caused costs to increase. In July, the average jet fuel price reached $165 per barrel. — VNS

Air passengers reach record number, delays and cancellations increase have 709 words, post on bizhub.vn at August 12, 2022. This is cached page on VietNam Breaking News. If you want remove this page, please contact us.