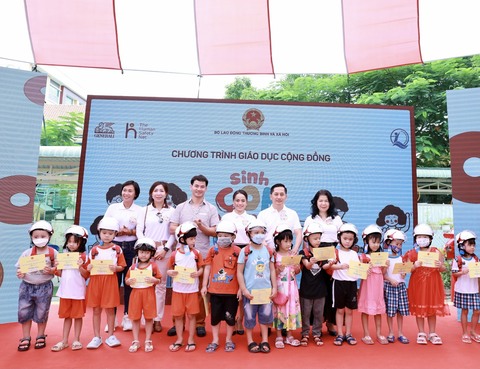 Representatives of Generali Vietnam and the National Fund for Vietnamese Children hand over 250 gift sets to children in HCM City. — Photo courtesy of Generali

More than 600 parents, children, teachers and child caregivers discussed child health, behaviours and intelligence at a workshop in HCM City on July 4.

"We are heartened to see the community educational workshop was well received with great enthusiasm from participating parents in HCM City. This is a strong testament to the programme's positive impacts on parents in urban and rural areas," said Generali Vietnam CEO Tina Nguyen.

This was the first Sinh Con, Sinh Cha workshop in HCM City after a series of local workshops had been successfully rolled out in various cities and provinces across the country, reaching out to more than 4,200 parents, children, and kindergarten teachers and staff.

At the event, Generali Vietnam handed 250 gift sets and programme booklets to children, their parents and child caregivers, as well as cash and gift sets to 30 local families in extreme hardship.

The Sinh Con, Sinh Cha programme is part of "The Human Safety Net", a Generali Group global movement initiated in 2017. The Human Safety Net's families programme supports parents in the first six years of their children's life to lay the strongest possible foundations for their future, contributing to early childhood development (ECD) in disadvantaged communities worldwide.

In Viet Nam, the local programme is developed by NFVC and Generali Vietnam, referencing UNICEF's materials.

The programme aims to offer parents with children between 0-6 years, parenting knowledge, experience and skills to help children grow to their full potential in the love of the family. — VNS

Workshop discusses child health and intelligence have 528 words, post on bizhub.vn at July 5, 2022. This is cached page on VietNam Breaking News. If you want remove this page, please contact us.