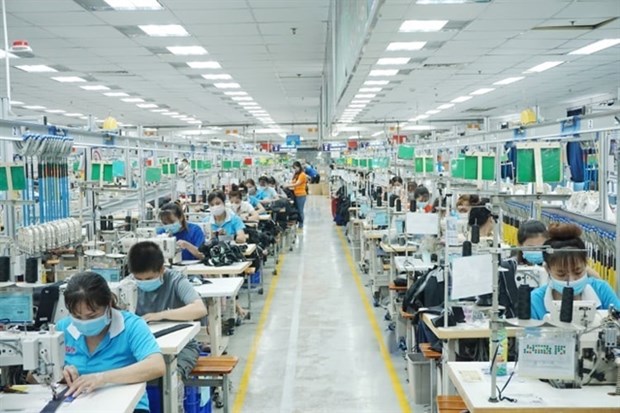 Workers at a factory in Binh Duong province (Photo: VNA)

Hanoi (VNS/VNA) – As prices surge, labourers are not only hoping for a pay rise but also an increase in additional allowances in order to relieve some of the growing financial pressure .

A worker's monthly income usually consists of the base salary, overtime pay and allowances.

Do Thi Thu Hoai, an employee in Phu Tho province, said: "I have been working at this company here for five years, but the allowances have remained the same for me.

"I see that several other companies provide an amount for accommodation support, but here we don't receive any."

There was an allowance for employees with children of 100,000 VND (4.30 USD) per month, but this no longer exists, she said.

She added that not only have these amounts remained unchanged throughout the years, but they also follow a very strict policy.

The allowance for diligence, for example, can only be given if the employee has perfect attendance in that month. If they come in late for 15 minutes or need to go outside for one hour, that would be a 100,000 VND deduction each time.

If they do not come to work for two days in a month, this attendance allowance will be subtracted completely.

Hoai said: "If my children are sick and I have to take two or three days off to take care of them, but without a leave of absence, then all of the allowances for attendance and fuel are gone."

Hoai's income in a month totals 6.3 million VND (270 USD), including overtime pay. Her husband works as a driver and receives around 8 million VND (342 USD) per month.

The couple have had to tighten their belts to make ends meet and put their two children through school.

Nguyen Thi Thu, a factory worker in Bac Ninh province, is in the same situation.

She receives around 1 million VND (43 USD) in allowances each month, in addition to her base salary of 4.2 million VND (180 USD).

"If an employee works here for long enough, they can receive an accommodation allowance –100,000 VNĐ per month at the six-month mark, and 300,000 VNĐ at the one-year mark."

For Thu, two days off without a leave of absence also means no additional pay for diligent attendance and fuel charges.

"In total, my highest monthly income is 8 million VND."

"There are also months when we don't have enough work to do and have to work on a shift rotation basis, then my monthly income drops to 4.6 million VND," said Thu.

Her husband, working at the same company, faces a similar situation.

According to Pham Thi Thu Lan, deputy director of the Institute for Workers and Trade Unions (IWTU), a recent survey shows that the average monthly base salary is 4.5 million VND, with professional allowances ranging from 250,000 VND to 2 million VND, along with 480,000 VND for full attendance.

Speaking to Lao dong (Labour) newspaper, Lan said: "With the aforementioned range, the amount paid by the employer could vary.

"Workers can take a few days off and lose the entirety of their attendance pay that month."

Some companies even take into account overtime work and productivity in these allowances. However, this is an employer's right and there is no specific regulation regarding the matter.

Lan said: "The only way to go is negotiation. The labour unions need to strengthen their role in collective bargaining to include more favourable terms, including allowance amounts, for employees in the collective labour agreement."

She added that if the terms on allowances are in the collective labour agreement then the company is obliged to follow them. However, if the regulations on these additional pays are only in the company's management rulebook then the execution decision lies with the employer./.

​Workers hope for allowance increase amid price surge have 889 words, post on en.vietnamplus.vn at July 5, 2022. This is cached page on VietNam Breaking News. If you want remove this page, please contact us.