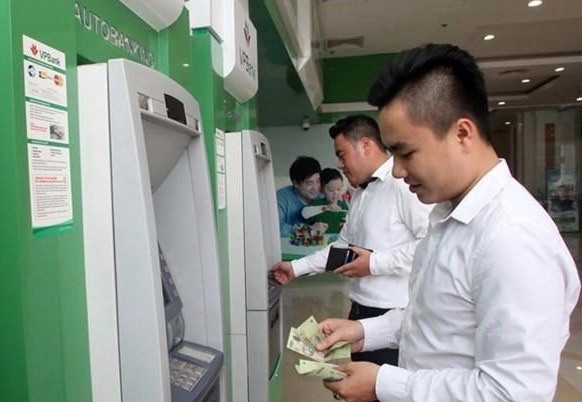 Office workers withdraw money from an ATM. (Photo: VNA)
In particular, workers in the processing – manufacturing industry had average income of VND7.3 million, rising by some VND476,000 year on year, while salary earners saw an increase of VND417,000 in their monthly income to VND7.4 million Pham Hoai Nam, Director of the Population and Labor Statistics Department under the General Statistics Office, told a press meeting in Hanoi on July 6.
In the second quarter, all the 21 economic sectors recorded year-on-year hikes in workers' average income, including mining (VND9.7 million, up 17.1 percent) and processing – manufacturing (VND7.4 million up 12.4 percent).
He said during 2019 – 2021, workers' income in Q2 often declined from the previous quarter since additional earnings coming from year-end extra work and Lunar New Year bonuses are usually paid in Q1.
However, the situation was different this year, when the Q2 average income did not decrease but went up both quarter on quarter and year on year.
It rose by 8.9 percent (about VND542,000) from the same period of 2021 – when the Covid-19 situation was getting complicated in many localities, and by 19.7 percent (nearly VND1.1 million) from Q2 of 2020.
This is a sign indicating that the Vietnamese economy is growing positively and strongly, Nam noted, adding that workers' life is gradually returning to the pre-pandemic levels.

Workers’ average monthly income grows 5.3 percent in H1 have 341 words, post on www.sggpnews.org.vn at July 6, 2022. This is cached page on VietNam Breaking News. If you want remove this page, please contact us.