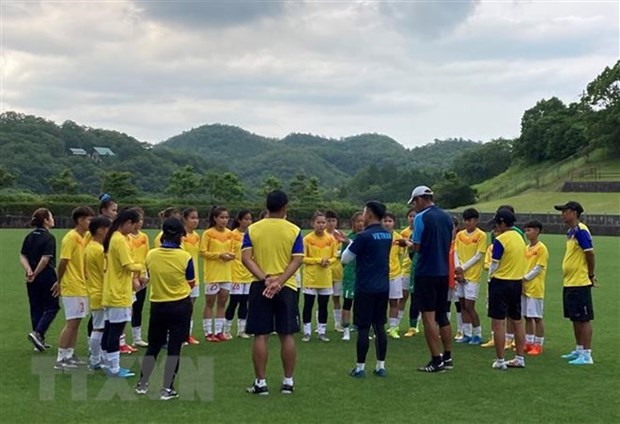 The women’s U18 team of Vietnam in a training session in Japan (Source: VNA)

Tokyo (VNA) – The U18 female footballers of Vietnam have wrapped up a training course in Okayama prefecture of Japan to prepare for the coming ASEAN Football Federation (AFF) U18 Women's Championship in Indonesia.

During the course starting on June 16, the team of head coach Ijiri Akira also played friendlies with the Vietnamese people's team of the Vietnam – Japan Sports and Culture Exchange Association in Kansai, and Okayama Yunogo Belle – a club playing at the Japan Women's Football League 2.

The Vietnamese footballers also engaged in exchange activities with primary and secondary schools in Okayama prefecture.

Nguyen Vo Huyen Duong, a representative of the Vietnam Football Federation in Japan, said aside from the women's U18 team, the women's U15 and men's U20 teams are also set to undergo training in Japan this August./.

Women’s U18 football team of Vietnam train in Japan have 280 words, post on en.vietnamplus.vn at July 3, 2022. This is cached page on VietNam Breaking News. If you want remove this page, please contact us.