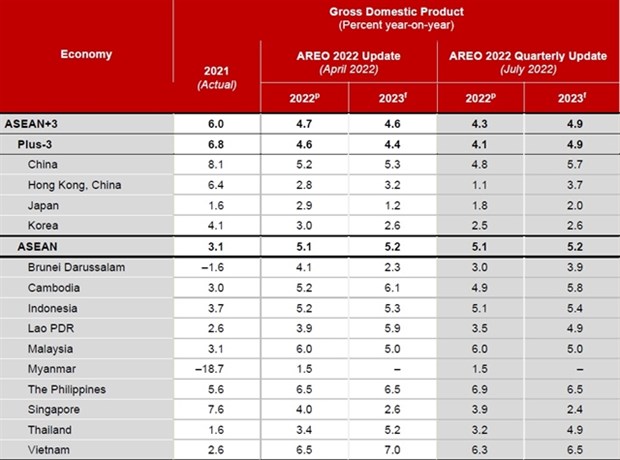 Projected GDPs for ASEAN+3 countries. Vietnam is forecast to be the second fastest-growing economy in the region this year. (Photo amro-asia.org)

Hanoi (VNS/VNA) – Vietnam is expected to come out second only to the Philippines in terms of projected GDP for 2022 and on top for 2023, according to a recent Quarterly Update of the ASEAN + 3 Regional Economic Outlook.

Specifically, the country was projected to achieve a growth rate of 6.3% this year and 6.5% next year, well above the region-wide figures which were estimated at 4.3% and 4.9% respectively.

Compared to the previous update, Vietnamese growth rates were revised downwards to reflect the lower growth forecasts for China and the US, its major trade partners. The country was expected to top the list with growth rates of 6.5% and 7.0% in the April update.

"Vietnam is a much more open economy and very exposed to the US and Chinese economies. Because we are expecting reductions in growth rates in these countries and the expected slowdown would affect its external demand, we have to shift down projected growth rates for Vietnam,” said Hoe Ee Khor, chief economist of the ASEAN+3 Macroeconomic Research Office (AMRO).

The Russian military operations in Ukraine have been pushing up commodity prices and global inflation. Relentless cost-push pressure, coupled with firming domestic demand, is expected to drive regional inflation higher this year, at 5.2%.

Regional inflation is projected to moderate to 2.8% in 2023 as tight monetary policy taken by various economies will take effect and the pandemic is showing signs of receding.

“Vietnam has a fiscal base to be able to keep prices down and afford subsidies for now. At the same time, it can also use fiscal policy to stimulate the economy. There is a need for infrastructure investments in the country, so it can pump prime the economy to make domestic demand stronger,” the chief economist added.

A sharper deceleration in China’s consumption and realty activities, according to AMRO, would significantly drag down the economy, with spillovers that would further undermine regional outlook.

Additionally, mounting prices in the US have caused the Federal Reserve to adopt contractual monetary policy at a faster pace than expected, raising concerns of an imminent recession. Financial investors have switched to safe assets and risk aversion has spiked, leading to capital outflows from emerging markets.

“Navigating this formidable environment, ASEAN 3 policymakers are now facing difficult policy trade-offs as they balance the need to sustain the growth momentum while containing the inflationary pressure,” Khor added.

Japan, the Republic of Korea and Myanmar are expected to enjoy growth rates of less than 3% this year, whereas Vietnam and the Philippines will be riding high with growth rates of over 6%. The other eight countries fall between 3 and 6%.

Regarding inflation, China and Japan are expected to do well with inflation rates kept under 3% in 2022. Meanwhile, Thailand, Myanmar, Laos and Cambodia will have their rates surpass 6%. The other seven countries fall between the two ends./.

Vietnamese economy to perform well: AMRO have 638 words, post on en.vietnamplus.vn at July 6, 2022. This is cached page on VietNam Breaking News. If you want remove this page, please contact us.