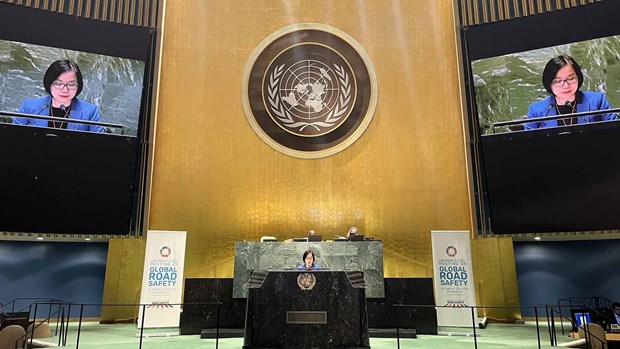 New York (VNA) – Vietnam has reaffirmed its support and contributions to the UN’s efforts to improve road traffic safety at a UN General Assembly session being held on June 30 and July 1.

The session adopted the "Political declaration of the high-level meeting on improving global road safety", with the 193-member General Assembly committed to drive the implementation of the Global Plan for the Decade of Action for Road Safety 2021–2030, including the goal to half road traffic deaths in the next eight years.

Speaking at the event, Ambassador Nguyen Phuong Tra , Charge d’affaires a.i. of Vietnam to the UN, affirmed that Vietnam totally supports the Decade of Action for Road Safety 2021–2030.

For the realisation of its goal, she said it is necessary to strengthen road safety legislation at global, regional and national levels to address current and emerging challenges. In addition, more investment is needed in developing infrastructure and road safety capacity in low- and middle-income countries, where 90% of traffic accidents are reported.

Tra also emphasised the need to build a culture of traffic safety through education and awareness of obeying traffic laws such as using seat belts and helmets, as well as through the application and implementation of IT and innovation. In this process, developed countries and international financial institutions play an important role in transferring technology, sharing best practices, and providing financial support for developing nations, the diplomat added./.

Vietnam backs UN’s efforts to improve road traffic safety have 358 words, post on en.vietnamplus.vn at July 1, 2022. This is cached page on VietNam Breaking News. If you want remove this page, please contact us.