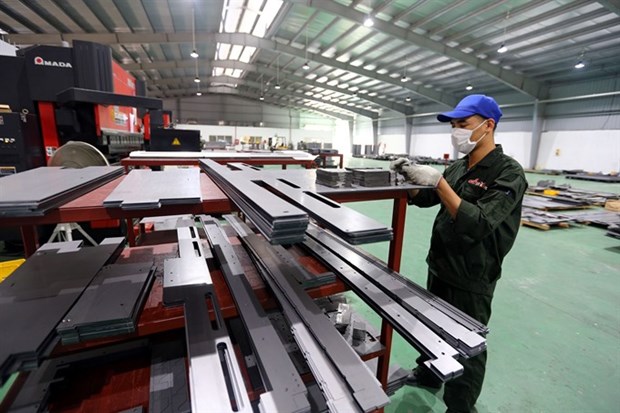 A worker checks steel products at an industrial zone in the northern province of Bac Giang. The province has granted licences to 46 FDI projects with a combined investment of 152.2 million USD, bringing the total numbers to 233 projects and 3 billion USD.(Photo: VNA)

HCM City (VNS/VNA) – Vietnam is among the few ASEAN member countries to consistently improve its attractiveness to foreign investors due to its growing economy and improving business climate , according to experts.

According to Berly D. Alvarez, chairman of the Philippines's Kaunlad Lending Investors Corporation and a speaker at the 2018 Horasis Asia Meeting held recently in Binh Duong province, Vietnam's ability to attract FDI is due to its consistent economic reform, a young and increasingly urbanised population, affordable labour, constant improvements to its business climate, and political stability.

The fact that it hosted the 2017 APEC meetings highlights its regional economic integration and steadily improving business climate, he added.

Vietnam has been attracting investment in infrastructure, including power projects, road and rail construction and renewable energy.

"More foreign investment is expected to flow into Vietnam in the coming time."

Pham Hong Hai, CEO of HSBC Vietnam, said, "We also see potential trade diversion as US import demand shifts away from China to other ASEAN markets like Vietnam."

While this trend is a good sign for the development of the country, it also puts more pressure on the country and businesses to develop infrastructure, he said.

"So improving labour productivity through better education and vocational training, I think, should thus be a priority for the Government."

While it is true that a large portion of the workforce can transition from agriculture, most might move only to low-end manufacturing and there remains a dearth of qualified workers to advance to higher positions, he said.

The Government has made efforts like improving the quality of primary and secondary education, but more needs to be done.

Improving tertiary education and vocational training, boosting private-sector-led in-house training, and providing lifelong learning opportunities are some of the reforms needed if the country wants to take full advantage of its current demographic "sweet spot" and the possible trade diversion.

Experts recommended that Vietnamese businesses should take advantage of Industry 4.0, investing more in technology to enhance their competitiveness.

In addition, policy reforms to attract even more foreign investment are important for future growth and raising the country's competitiveness, especially in sectors like infrastructure and manufacturing, they said.

The judicial system and infrastructure in Vietnam need improvement as do higher education and vocational training, he said.

Some companies could put up factories in Vietnam due to the US- China trade war, but the country's generally low-quality workforce and technological capacity could be a big hurdle, Alvarez said.

Vallisuta of the Quant Group Corporation said though the US has spread its manufacturing to more countries, and this could benefit them, the global slowdown and market volatility could have a bigger impact than the benefits.

Companies could also prefer a familiar eco-system and abundance of goods rather than just affordable labour, he said.

Vietnam needs to reduce its overreliance on global value chains by targeting ASEAN as a source of demand for products in sectors such as agriculture and electronics.

Lam of VinaCapital said, "I think the trade war will likely lead to increased foreign direct investment in Vietnam as companies look to move manufacturing operations to the country, and we are likely to see continued export growth."

In the short term Vietnam should benefit, but, ultimately, this sort of tension between the world's two largest economies is not productive for the global economy and could have ramifications in the longer term if not resolved, he said.

Alvarez said the country should aim for more "high quality" FDI inflows, focusing on projects that use modern, environmentally-friendly technologies and competitive products that could be part of the global production network and value chain.

According to the Vietnam Foreign Investment Agency, the country had attracted 30.8 billion USD worth of registered FDI this year as of November 20. — VNS/VNA

Vietnam a regional FDI magnet, say experts have 887 words, post on en.vietnamplus.vn at December 10, 2018. This is cached page on VietNam Breaking News. If you want remove this page, please contact us.