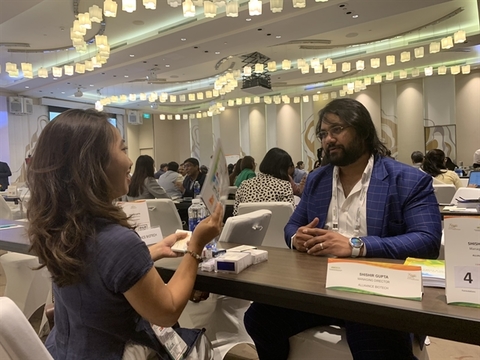 Vietnamese and Indian businesses from the pharmaceutical sector participate in a B2B meet at the India – Viet Nam Pharmaceuticals and Health Industry Conference on July 5. — VNS Photo Thu Hang

Viet Nam is seeking co-operation with India in the field of pharmaceuticals, especially manufacture of vaccines for COVID-19, a conference heard on Tuesday.

Pharmaceuticals were one of India's key exports to Viet Nam last year at US$267 million, he said.

The Vietnamese pharmaceutical market has been experiencing strong growth in recent years with 250 factories, 200 import-export facilities, 4,300 wholesalers, and 62,000 retailers as of this year.

Around 300 Indian drug companies had representative offices in Viet Nam, including large firms such as Sun Pharma, Natco, and Mylan, but there was an absence of joint ventures between Viet Nam and India, he remarked.

Pranay Verma, India's ambassador to Viet Nam, said co-operation in the pharmaceutical sector was an important component in overall co-operation between the two countries.

He invited Indian companies to explore partnerships and investments in Viet Nam.

The 200 participants at the conference were also updated on the latest regulations and guidelines for doing business and investing in the Vietnamese pharmaceutical sector.

Ta Manh Hung, deputy director of the Drug Administration, said the trade partnership between the two countries had been growing rapidly, presenting opportunities for India to increase its share in the pharmaceutical industry.

The Vietnamese market with an annual growth rate of more than 10 per cent represents significant opportunities for Indian investors, according to Hung.

The Indian consulate in HCM City, the Pharmaceuticals Export Promotion Council of India and the VCCI organised the conference, which was followed by a B2B meet.

It was held as part of a series of activities by the consulate to commemorate the 50th year of diplomatic relations between Viet Nam and India. —VNS

Viet Nam, India eye partnership in pharmaceutical sector have 505 words, post on bizhub.vn at July 6, 2022. This is cached page on VietNam Breaking News. If you want remove this page, please contact us.