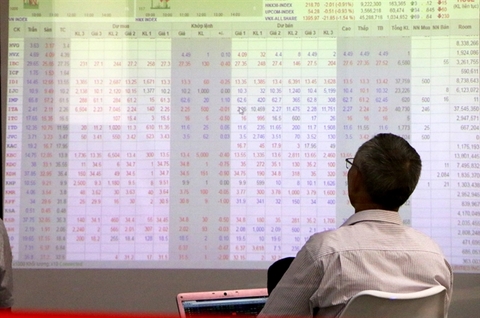 In the first half of 2022, both market’s benchmark index and liquidity plunged sharply, with the VN-Index posting a dip of over 20 per cent, making it one of the world’s worst-performing stock markets.

Market capitalisation lost over US$53 billion

In the first six months of this year, especially from April until now, the Vietnamese stock market has witnessed a significant decline and fell below the 1,200 threshold as bottom-fishing demand was not strong enough. After six months, VN-Index plummeted by 20 per cent, while the HNX-Index recorded a decrease of 41.4 per cent year-on-year.

According to China-based stock database Stockq, a drop of more than 20 per cent has made the VN-Index one of the worst-performing stock indices in the world during that period.

Data from Bloomberg showed that the benchmark closed June at 1.1976 points, equivalent to a price to earning ration (P/E) of 13x which is even below the 10-year average of 15x. In the same period last year, the market’s P/E hit the peak of over 19x.

More than half of the market capitalisation “evaporation” in the first six months came from the VN30 group, which tracks 30 biggest stocks on HoSE, including big names in banking, real estate and manufacturing sectors such as Vinhomes (-$3.76 billion), Vingroup ($-3.55 billion), Hoa Phat Group (-$3.39 billion), Vietnam Rubber Group (-$2.5 billion) and Techcombank (-$2.21 billion).

In addition, most of the stocks that joined the billion-dollar market-cap club last year had left the group this year, for example Thu Duc Housing Development Corporation, Development Investment Construction, VNDirect Securities Corporation, and Gelex Group.

By the end of June, there were 52 stocks with market capitalisation over $1 billion, of which HoSE alone has 43 representatives.

Liquidity hit the lowest in a year

The liquidity also fell strongly with the average trading value per session on HoSE in June of only VND13.1 trillion, the lowest in a year and down 57 per cent compared to the peak set in November 2021 of nearly VND31 trillion per session.

In the newly released report of Everest Securities JSC, it forecasts that the liquidity will remain at low level amid environments of monetary policies tightening triggering higher costs of capital, and bear market making domestic retail investors more cautious.

Even though the number of new accounts recorded peaked with more than 470,000 units in May, despite the VN-Index broke through the milestone of 1,200 points, the cash flow from new investors can not reach the historical levels like it did in 2020 and 2021.

The decline in liquidity was in line with the change in the investor structure.

Accordingly, in May, the group of foreign organisations surpassed 9.64 per cent, the highest in one year, while, the proportion of domestic retail investors continued to slide to 82.27 per cent, reflecting more doubtful and cautious sentiment.

Foreign investors’ activities are expected to be the main trend, supportting the market in the coming time, as Vietnamese real interest rate is currently positive as inflation is controlled and many stocks are trading at attractive prices compared to their valuation.

Moreover, the legal foundation has been improved in recent years, increasing transparency for foreign investors.

The biggest risk for the Vietnamese stock market in particular and the global stock markets in general is rising inflation in the world’s big economies, including the US and the European Union. Besides high inflation, these economies also face high unemployment and low growth at the same time.

The market report for the second half of 2022 released by PetroVietnam Securities Incorporated (PSI) says that the country’s stock market is likely to continue to correct according to the global markets.

Viet Nam among world's worst performing stock markets in first half have 805 words, post on bizhub.vn at July 4, 2022. This is cached page on VietNam Breaking News. If you want remove this page, please contact us.