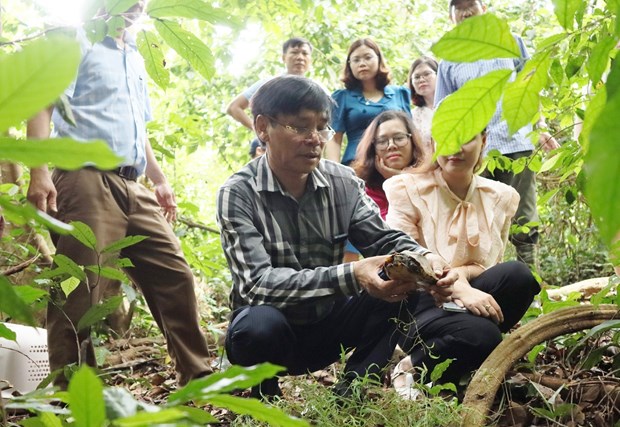 Wild animals were released back to the Cuc Phuong National Park on July 2. (Photo: VNA)

Ninh Binh (VNA) – As many as 58 animals of eight species, including civet, king cobra, keeled box turtle, crested bird, cuckoo, yellow-billed starling, red-breasted parakeet, and Japanese zosterop, along with some cobras, were released back to Cuc Phuong National Park on July 2.

The activity was organised by the management board of the Cuc Phuong National Park and the Hanoi Wildlife Rescue Centre (HWRC) of the Hanoi Department of Agriculture and Rural Development.

These animals are all exhibits that have been rescued in illicit wildlife trading cases or voluntarily handed over by organisations or individuals.

Chu Phu My, Director of the Hanoi Department of Agriculture and Rural Development, said his agency has effectively cooperated in nature conservation with the management board of the Cuc Phuong National Park – the unit that has great achievements in wildlife conservation and environmental education.

According to a representative of the Centre for Rescue, Conservation and Development of Creatures of the Cuc Phuong National Park , this was the second time in the past two years the two units have collaborated with each other to release a large number of wild animals into the Cuc Phuong primeval forest./.

Tens of wild animals released back to nature have 467 words, post on en.vietnamplus.vn at July 2, 2022. This is cached page on VietNam Breaking News. If you want remove this page, please contact us.