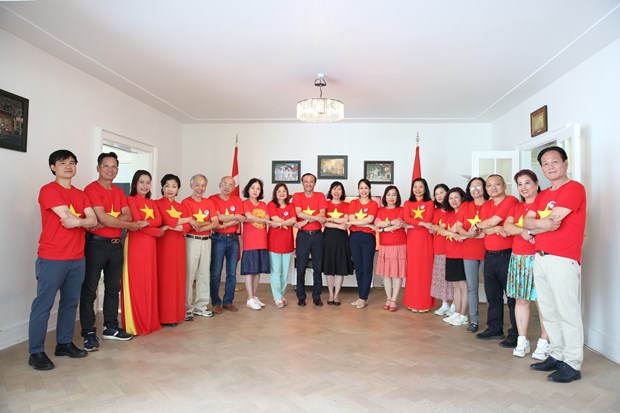 Hanoi (VNA) – Vietnamese Ambassador to Denmark Luong Thanh Nghi engaged in exchanges on June 25 and 26 with a delegation of 20 overseas Vietnamese (OV) who participated in trips to Truong Sa (Spratly) archipelago and the DK1 marine platform in 2019 and previous years.

The overseas Vietnamese, who dubbed themselves as "Truong Sa soldiers", showed the ambassador photos they took during the trip and recalled the moving moments when they saw with their own eyes the daily life of soldiers and people on islands in Truong Sa and the DK1, through which they felt the firm will and resolve of the soldiers at the frontline of the fatherland.

According to the OV delegates, following their trips, many forums and clubs of " Truong Sa soldiers" have been established in Germany, Poland, the Czech Republic, Hungary or the Republic of Korea to spread the love of Vietnam's seas and islands among the OV communities.

In Europe, the "Truong Sa soldiers" regularly meet and support each other in their daily life, with the current visit to Denmark one of their activities.

The OVs thanked the Vietnamese Navy, the State Committee for Overseas Vietnamese Affairs and the Foreign Ministry for organizing the meaningful trips to Truong Sa and the DK1, giving OVs a deeper understanding about the situation in the homeland in general and in the seas and islands in particular.

Ambassador Nghi took note of the proposals of the OVs, which he will convey to relevant agencies so that they can better arrange visits to Truong Sa and the DK1 platform in the years to come.

On the occasion, the OVs and the diplomat discussed the establishment of a liaison committee of "Truong Sa soldiers" in Europe. They collected nearly 3,000 EUR to buy gifts for Truong Sa on the occasion of the 2023 Lunar New Year./.

Overseas Vietnamese spread love of Truong Sa among Vietnamese communities abroad have 439 words, post on en.vietnamplus.vn at June 29, 2022. This is cached page on VietNam Breaking News. If you want remove this page, please contact us.