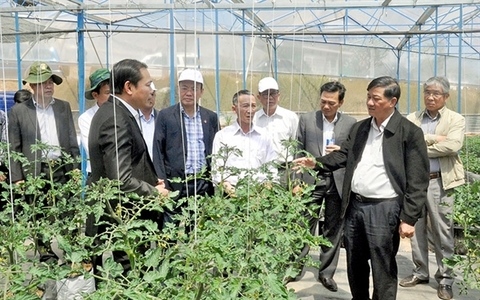 The Central Highland province of Lam Dong will need to train a highly skilled workforce, expand international cooperation and lure foreign investment in hi-tech agriculture in an effort to become a national agriculture hub.

According to Nguyen Van Chau, deputy director of the province's Department of Agriculture and Rural Development, Lam Dong, blessed with a mild climate and fertile soil suitable for agriculture, aims to attract FDI in hi-tech agriculture to add value and meet market demand, especially for exports.

It plans to focus on restructuring crops and building concentrated production areas.

It will invest in equipment and machinery, upgrading factories, supporting human resource training and building processes that meet international standards.

Priority will be given to large-scale FDI enterprises with high capability in terms of capital, technology and markets. The projects must also use few natural resources.

Chau added that FDI attraction would be based on the Law on Investment, Law on Enterprises, Law on Land, and Law on Forest Protection and Development.

Lam Dong has 78,000 ha for farming areas that meet Good Agricultural Practices standards such as VietGAP and GlobalGAP, which accounts for 26 per cent of the province's total farm area, according to the department.

High-tech agriculture covers more than 63,100 ha, or 21 per cent of the total cultivated area.

Investment in high-tech agriculture in Lam Dong has brought about 30-50 per cent higher economic efficiency than conventional production, experts say.

To date, the province has lured 103 DFI projects, mostly in hi-tech agriculture, with total registered investment of US$533 million, according to the Planning and Investment Department.

Lam Dong exports farm produce to around 40 countries and territories around the world with traditional markets being Northeast Asia, Europe and North America, according to the Department of Agriculture and Rural Development.

It also supplies agricultural products and raw materials for export to many multinational corporations and large distributors.

As of the end of last year, exports of farm produce hit $320 million, or almost 45 per cent of its total exports. Key exports include vegetables, flowers, green tea and coffee.

Accordingly, exports of sweet corn, sweet potatoes and carrots to the EU, East Asia and ASEAN countries (volume of 34,000 tonnes) were worth $60 million.

Flower exports to East Asia, Australia and ASEAN countries were worth $58.7 million.

To boost exports to potential markets such as the EU, the province will focus on organic farming, safe agriculture production and processing to create added value.

The province will also upgrade technical infrastructure for production to meet international quality standards. This will allow farmers to take advantage of the incentives of the EVFTA Agreement, according to Chau.

The province will also work to improve logistics services to support businesses, especially those newly engaged in exporting, with package services such as packaging, warehousing, customs clearance, transportation and delivery.

It is also prepared to deal with any technical barriers arising in the export markets. — VNS

Lam Dong lures FDI in hi-tech agriculture have 635 words, post on bizhub.vn at July 4, 2022. This is cached page on VietNam Breaking News. If you want remove this page, please contact us.