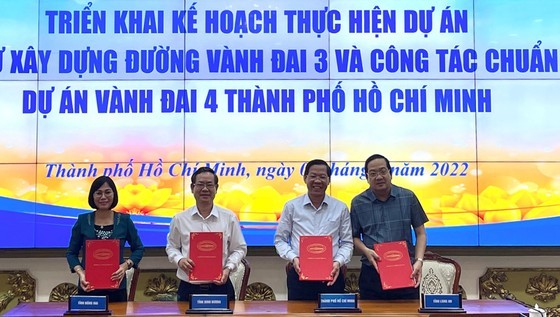 Chairman of Ho Chi Minh City People’s Committee Phan Van Mai signs a regulation on the construction coordination of the Ring Road 3 Project in Ho Chi Minh City with leaders of three provinces of Long An, Binh Duong and Dong Nai at the conference.

Speaking at the conference, Director of Ho Chi Minh City Department of Transport Tran Quang Lam said that the People’s Committees of three provinces and HCMC have directed departments, relevant agencies and units to implement component projects according to the assigned timelines under the direction of Deputy Prime Minister Le Van Thanh.

Specifically, the Ring Road 3 investment and construction project is adjusted to implement in advance half of a year over the previous plan, starting in June of 2023; the policy of project investment is set to be completed in July of 2022 following the Resolution promulgated by the Government; the approval and handover the area of site clearance are set to be performed from August 2022; the approval of policies on compensation, support and resettlement, the promulgation of land revocation and approval of compensation plan, support and resettlement are expected to be implemented in March 2023. 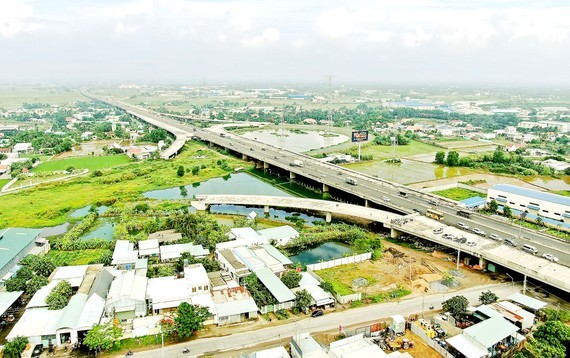 Ben Luc intersection in Long An Province, which will connect with the Ring Road No.3 in HCMC.
The site hand-over is expected to start from the beginning of October 2022 to December 30, 2023 and the whole site hand-over for the project is set to be completed by March 2023. The Ring Road No.3 project is expected to perform the technical traffic opening by October of 2025 and completed the whole route in June of 2026.

The localities will implement the component projects in accordance with their authorization and appropriate special mechanisms establishment and relevant legal regulations for the projects; review the resettlement demand, build the plans of resettlement allocation in the provinces, and city to ensure the progress of land revocation; build and publicize the unit prices of construction materials for the projects, ensure the materials supply in accordance with the market price.

Chairman of the HCMC People's Committee Phan Van Mai said that Ho Chi Minh City along with the provinces of Dong Nai, Binh Duong and Long An will implement the assigned component projects in accordance with the authorizations, appropriate special mechanisms and relevant legal regulations. The People's Committee of the provinces and city will direct the relevant units to advise the allocation of the local budget to ensure the component projects progress and establish the Project Advisory Council including experienced experts in the fields of engineering, construction materials, technology, bidding, project management and so on.

Deputy Minister of Transport Le Dinh Tho agreed with HCMC People's Committee's Chairman and noticed that the localities need to clarify the responsibilities, authorities of each locality, and each unit in advance of the component projects implementation.

Notably, the site clearance will face difficulties will eight component projects and the localities have to hand over 70 percent of the site for project management so that the cooperation, and the responsibilities of localities are highly important.

HCMC, three localities strengthen coordination to promptly implement Ring Road 3 have 669 words, post on www.sggpnews.org.vn at July 3, 2022. This is cached page on VietNam Breaking News. If you want remove this page, please contact us.