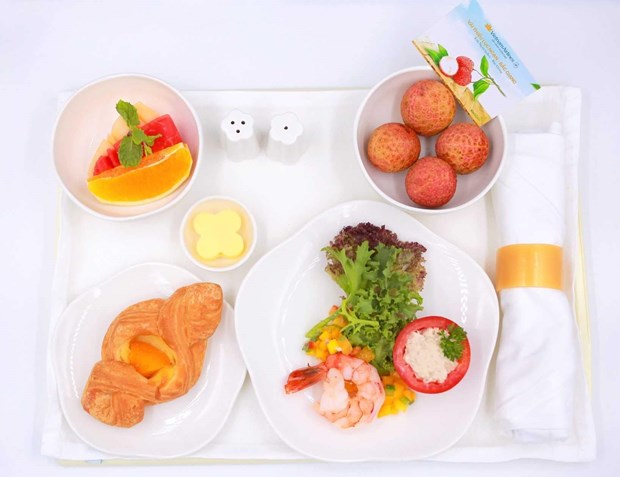 Hanoi (VNA) – Fresh lychee, which is in season now in northern Vietnam, has returned to in-flight meals on Vietnam Airlines after a hiatus due to the COVID-19 pandemic.

The fruit, grown in Bac Giang province, is being served to business class passengers on the national flag carrier 's domestic and international routes from Hanoi from July 1-15.

The move aims to introduce the specialty to both domestic and foreign passengers and expand cooperation with businesses and localities to promote Vietnamese agricultural products to the world.

Phan The Tuan, Vice Chairman of the Bac Giang People's Committee, underscored that the province is home to the country's largest lychee-growing area of over 28,000 hectares. Bac Giang's lychee was the first Vietnamese product to be granted PGIC in Japan and is eligible for trademark protection in eight countries.

The vice chairman also noted that Bac Giang's lychee is now available in over 30 countries.

He said the province will continue to boost lychee exports to high-end markets and try to gain entry into new markets, including Canada and Thailand./.

Fresh lychee on national flag carrier’s in-flight menu have 338 words, post on en.vietnamplus.vn at July 1, 2022. This is cached page on VietNam Breaking News. If you want remove this page, please contact us.