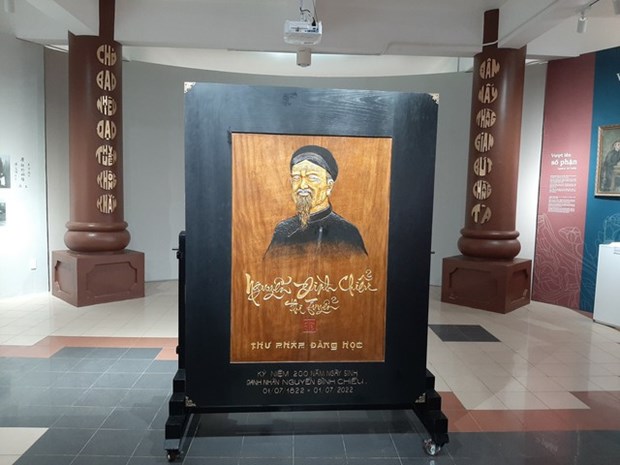 The book’s author, Vu Dang Hoc, was honoured as the maker of the largest calligraphy book on poet Nguyen Dinh Chieu in the world.

The book, measuring 1.8m x 1.4m with an iron base and weighing 500 kilogrammes, was created by calligrapher Vu Dang Hoc to celebrate the 200th birth anniversary of poet Nguyen Dinh Chieu (1822-2022).

It took Hoc five months to complete the book, after which he presented it to Nguyen Dinh Chieu Library in Ben Tre province where Chieu spent the last 26 years of his life.

The poet was known for his nationalist and anti-colonial writings against the French and his exemplary teaching, and was also a popular medical practitioner. He is a role model for people with disabilities around the world. Despite his condition, he studied Confucianism and Oriental medicine.

His most famous work, Luc Van Tien (The Tale of Luc Van Tien), is an epic poem written in nom (the old Chinese-based Vietnamese script) was penned in the 1850s. It is regarded as one of the most influential poems in Vietnamese history, along with Truyen Kieu (The Tale of Kieu) by Nguyen Du. The work has been translated into multiple languages, including French, English and Japanese./.

Calligraphy book on poet Nguyen Dinh Chieu recognised as world record have 412 words, post on en.vietnamplus.vn at July 2, 2022. This is cached page on VietNam Breaking News. If you want remove this page, please contact us.