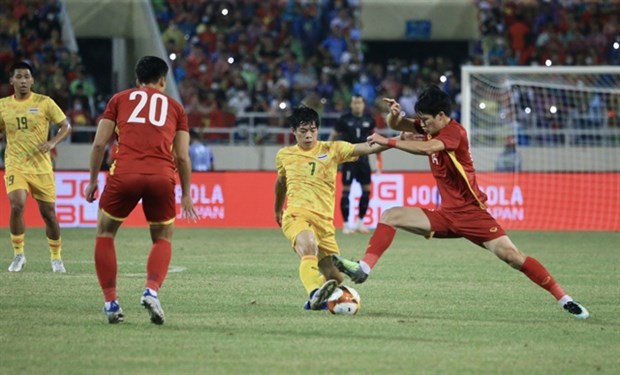 Nguyen Hoang Duc (right) in the SEA Games 31's final between Vietnam and Thailand on May 22 in Hanoi. (Photo: VNA)

Hanoi (VNS/VNA) – The AFC Cup’s ASEAN Zone will be back in action on June 24, nearly two years after it was cancelled in 2020, featuring eleven Southeast Asian clubs battling it out for regional glory.

Ahead of the start of the competition, the AFC has highlighted Vietnamese midfielder Nguyen Hoang Duc of Viettel FC and four others as promising stars to watch as they try to help their clubs make a memorable run this season.

“A key component of the Viettel side and a regular for the Vietnam national team, Nguyen Hoang Duc has been among the most talked-about players in the Southeast Asian country in recent years and is set to grace the AFC Cup for the first time,” the website wrote about the 24-year-old player.

“A midfielder with an eye for goal, Duc helped Viettel secure the V.League 1 title in 2020 and subsequently appeared in their maiden AFC Champions League campaign a year later, where he scored their first-ever goal in the competition in what proved their first-ever win.

“Having made his international debut in 2019, Duc was part of the Golden Star Warriors' AFC Asian Cup qualifying campaign and scored his first goal for his country in a 3-0 win over Malaysia at the AFF (ASEAN Football Championship) Cup in late 2021.”
The Hai Duong province-born player helped Vietnam to their second SEA Games title last month. He is expected to follow the likes of countrymen Nguyen Quang Hai and Nguyen Van Quyet as Vietnamese stars.

The AFC also mentioned Ilija Spasojevic of Bali United. The striker netted 23 goals in 34 games to finish as the Indonesian league's top scorer for the first time last season, ensuring his side returned to the AFC Cup for the third time.

Spasojevic was twice on the scoresheet in the 2018 group stage before Bali were eliminated, while he added two more to his tally in the 2020 edition that was subsequently cancelled prior to the completion of the group stage.

Striker Ronald Ngah joined Malaysia's Kedah Darul Aman early this year and is expected to help his club do well.

Ngah played for Al Salt and took the top scorer title at the Jordanian Pro League. In last year’s AFC Cup’s West Zone, he scored four goals in three games, including a hat-trick against Palestine's Balata Central, to fire his side into the knockout rounds.

In the domestic Super League this season, Ngah, 30, found the back of the net seven times in nine games to sit second in the scoring charts ahead of his return to the continental competition .

Cambodian winger Keo Sokpheng of Visakha FC will make his AFC Cup debut at the age of 30 as both he and Visakha venture into unknown territory.

Sokpheng, 30, recently turned out for the Cambodian national team in the AFC Asian Cup 2023 qualifying campaign, where he scored the equaliser to secure the Keisuke Honda-coached side a 2-2 draw against Afghanistan.

Being a football star for seven years, he won league titles at Boeung Ket FC and Phnom Penh Crown before joining Visakha in 2018 and won the Hun Sen Cup last year.

The last player to catch supporters’ eyes is Boris Kopitovic of Tampines Rovers of Singapore.

The 27-year-old striker came to Tampines Rovers in 2020 and he scored the winner in a 2-1 victory over PSM Makassar before again getting on the scoresheet as Tampines beat Shan United.

The Montenegrin is leading the Singapore Premier League scoring charts, having netted 12 goals./.

Vietnamese midfielder highlighted as one to watch at AFC Cup have 725 words, post on en.vietnamplus.vn at June 23, 2022. This is cached page on VietNam Breaking News. If you want remove this page, please contact us.