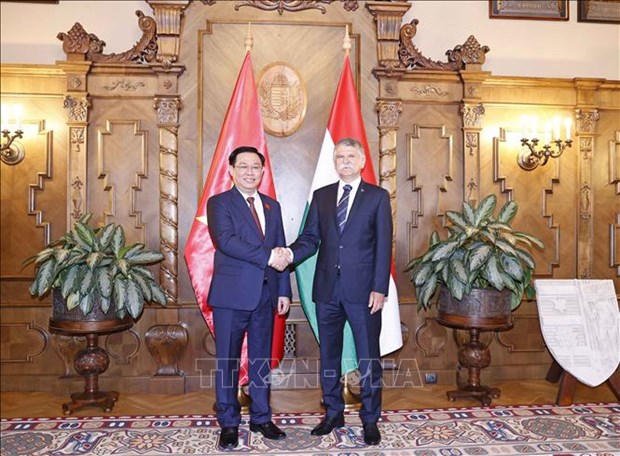 Budapest (VNA) – National Assembly (NA) Chairman Vuong Dinh Hue and his Hungarian counterpart László Kövér had in-depth talks in Budapest on June 27 (local time) on various issues in the Vietnam-Hungary relations with parliamentary cooperation and coordination at international and regional mechanisms as an important pillar.

Welcoming the Vietnamese top legislator and the high-ranking Vietnamese delegation to Hungary, Kövér affirmed that Hungary considers Vietnam an important partner in Southeast Asia. He highlighted that the friendship and cooperation between the two countries have been tested in difficult times during COVID-19 period. He thanked the Vietnamese NA for giving Australia sincere support in the first days of COVID-19 outbreak.

NA Chairman Hue congratulated Hungary on the successful organisation of the parliamentary election in April, as well as Kövér on being elected as the Speaker of the Hungarian NA for the fourth time. As a close friend of Hungary, Vietnam always follows the country's developments and congratulates Hungary on its socio-economic achievements as well as rising position and prestige in the region and the world.

Both sides shared pleasure at the sound traditional friendship and all-round cooperation over the past 70 years, and agreed that despite a long geographic distance, the two countries share many similarities in cultural tradition and common values, which is a foundation for them to deepen their multifaceted partnership.

Regarding regional and international issues, they agreed on the need to respect the independence and sovereignty of states, settle disputes in international relations through peaceful measures, uphold the law and protect the interests of countries and nations in line with international law. The two countries have shared the viewpoints and showed close coordination at international forums, they added.

NA Chairman Hue affirmed that the State, NA and people of Vietnam always remember the effective support that Hungary has given Vietnam during the past struggle for independence as well as the current national construction, defence and development.

Hungary, one of the first countries to recognise and set up diplomatic relations with Vietnam, has helped Vietnam train many officials, including many senior leaders, he noted, stressing that Vietnam always treasures and hopes to further foster the all-round partnership with Hungary – the first comprehensive partner of Vietnam in the central eastern European region. 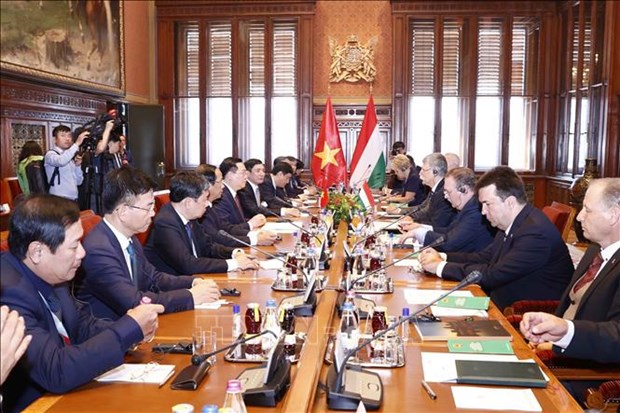 An overview of the talks between NA Chairman Vuong Dinh Hue and Speaker of the Hungarian NA László Kövér  (Photo: VNA)

He thanked Hungary for providing Vietnam with COVID-19 vaccines and medical equipment, helping it overcome difficulties and put the pandemic under control. Thanks to the support from the international community, including Hungary, from a country facing a shortage of vaccines, Vietnam has become one of the leading countries in COVID-19 vaccine coverage, he added.

The two NA leaders briefed each other of the political, socio-economic situation and the NA operations in each country. NA Chairman Hue said that after putting COVID-19 under good control, Vietnam has switched to a new period of opening and recovering with the aim of reaching an economic growth of 6.5-7 percent.

For his part, Kövér said that Hungary is enjoying good recovery and growth, and is willing to share its experience with Vietnam.

The two sides highly valued positive progress in the bilateral relations over the years, reflected through meetings of high-ranking leaders and officials at all levels. Particularly, during the Hungarian visit by Party General Secretary Nguyen Phu Trong in 2018, the two countries lifted up their ties to a comprehensive partnership, they noted.

Economic cooperation between the two countries has also developed despite COVID-19 impacts, with increasing two-way trade, they said. NA Chairman Hue thanked the Hungarian NA and Government for actively supporting the signing and ratification of the EU-Vietnam Free Trade Agreement (EVFTA). Hungary has been the first EU member to ratify the EU-Vietnam Investment Protection Agreement (EVIPA), creating favourable conditions for businesses of both sides to expand their partnership. Vietnam is willing to act as a bridge connecting Hungary with ASEAN and the region, NA Chairman Hue stated. Meanwhile, the top Hungarian legislator proposed that Vietnam strengthen trade ties with the group of four Central European countries (VISEGRAD) and Europe in general. The two sides agreed to develop the bilateral trade ties in a balanced and sustainable manner.

They concurred that it is necessary for the two countries to expand their science-technology collaboration in areas of environmental protection, climate change response, especially green agriculture, high-quality and clean farm produce processing.

Regarding development cooperation, NA Chairman Hue thanked Hungary for giving Vietnam a priority in the field over the years. The two sides agreed to hasten the two governments to remove the remaining barriers for the Can Tho Oncology Hospital project funded by Hungarian ODA, striving to complete the humanitarian project as soon as possible.

Mentioning cooperation in culture and people-to-people exchange, they underlined the need to promote tourism collaboration. They will work together for the establishment of a Hungarian cultural centre in Hanoi.

The 200 Hungarian scholarships have contributed to training high human resources for Vietnam, they said.

NA Chairman Hue took the occasion to thank the Hungarian State for creating favourable conditions for the Vietnamese community to settle down in Hungary and contribute to fostering the friendship and partnership between the two countries.

The two NA leaders also spent much time discussing the relationship between the two NAs, and shared delight at their growing ties that have become a model of parliamentary cooperation between Vietnam and European countries. They agreed to coordinate with and support each other at multilateral parliamentary forums, while maintaining the exchange of high-level delegations, those of specialised NA committees and Friendship Parliamentary Groups, aiming to exchange information and experience in parliamentary activities, and promoting coordination and mutual support at multilateral forums, including the International Parliamentary Union (IPU) and Asia-Europe Parliamentary Partnership (ASEP).

On the occasion, the two leaders signed an agreement on cooperation between the two NAs in the next period with deeper and more extensive contents that are suitable with the new context and situation. Under the deal, both sides will work together to organise a seminar on improving the legal framework on greenhouse gas emission reduction, renewable energy and green economy. 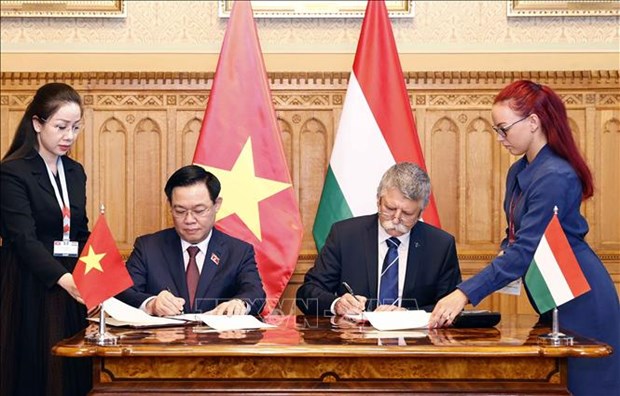 Following the talks, the two leaders witnessed the signing of cooperation agreements between the Vietnamese and Hungarian Ministries of Justice.

After that, they had a meeting with the media, during which they affirmed that their talks were successful. The Vietnamese and Hungarian NAs commit to work closely together for the practical interest and prosperity of both nations, they said.

"I and my Hungarian counterpart had a very successful conversation, not only on the relations between the two parliaments but also on orientations and measures to promote the comprehensive partnership between the two countries in the time to come. Along with bolstering and bettering political and diplomatic ties, we agreed that the two parliaments will continue to strengthen government and parliamentary cooperation to enhance the efficiency of our collaboration in economy, trade, investment, education-training, labour, science-technology as well as other areas that Vietnam and Hungary boast high potential for development," stated NA Chairman Hue.

He stressed that with the newly signed agreement, the Vietnamese legislature hopes to make its ties with the Hungarian NA a model of parliamentary cooperation between Vietnam and European countries and in the world and an important pillar in the Vietnam-Hungary comprehensive partnership. He expressed his belief that the Vietnam-Hungary ties will further thrive.

Earlier the same day, NA Chairman Hue and the Vietnamese high-ranking delegation laid a wreath at the Heroes’ Square in Budapest./

Vietnamese, Hungarian top legislators hold talks have 1351 words, post on en.vietnamplus.vn at June 27, 2022. This is cached page on VietNam Breaking News. If you want remove this page, please contact us.