Having lauded the strong growth and significant contributions of Thai people with Vietnamese origin in the province, the official pledged to create favorable conditions for the Vietnamese community to live and preserve their cultural works.

The governor wished that in the time to come, the two sides will work closely together for Udon Thani to send a trade promotion delegation to Vietnam and Vietnam to join Udon Thani's flower exhibition, and the opening of a direct flight route between them.

Agreeing with the governor’s proposals, Xuan lauded the cooperation between Udon Thani and Vietnamese localities and said it has contributed to boosting the Vietnam-Thailand strategic partnership.

She hoped the local authorities will further support the preservation of Vietnamese sites here, including pagodas, and provide optimal conditions for the Vietnamese community to live, study, work and connect the two nations.

Xuan suggested the provincial administration will support the teaching and learning of Vietnamese language among Thai people with Vietnamese origin, whose population in Udon Thani amounts to 15,000.

The Vice President highlighted the need for the two sides to beef up trade and infrastructure connectivity, particularly via the East-West Economic Corridor. 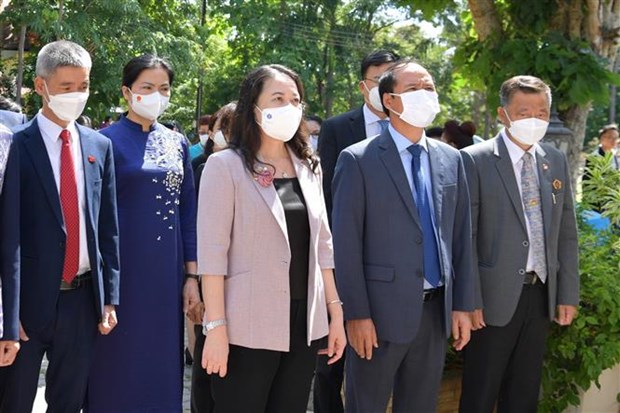 On the same day, the Vice President visited a relic site dedicated to late Vietnamese President Ho Chi Minh and a monument in commemoration of five Vietnamese revolutionists in the province./.

Vice President hails cooperation between Thailand's Udon Thani and Vietnamese localities have 424 words, post on en.vietnamplus.vn at June 22, 2022. This is cached page on VietNam Breaking News. If you want remove this page, please contact us.