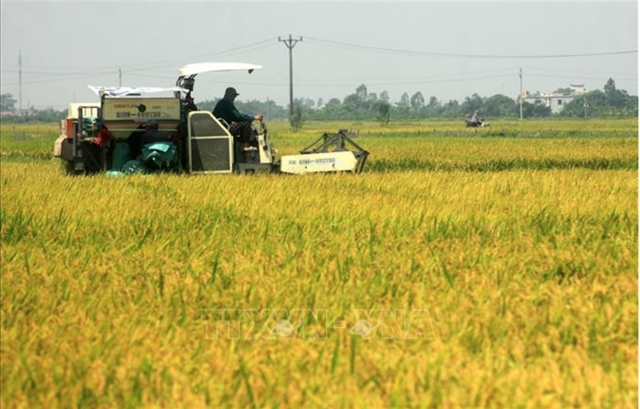 THÁI BÌNH­ — Thái Bình Province, dubbed the ‘hometown of rice’, has many advantages in rice production thanks to the natural conditions, climate, irrigation infrastructure and high level of intensive farming.

However, large-scale production and building a Thái Bình rice brand for export are still facing many difficulties. Production is not currently commensurate with the inherent potential.

Currently, the province is the locality with the second-largest cultivated rice area in the Red (Hồng) River Delta region, with an area of nearly 150,000 hectares with an output of over 1 million tonnes per year.

Instead of using the traditional farming methods, Thái Bình farmers have boldly applied scientific and technical advances in production to free up labour and improve productivity.

In recent years, the local farmers have been growing high-quality rice varieties with an average planting area of ​​40-70 per cent of the total cultivated areas.

Many farmers have started to invest in large-scale production by renting and accumulating land to enlarge their fields.

Nguyễn Thị Nga, director of the provincial Department of Agriculture and Rural Development, said that in recent years, rice production in the province had grown well with several effective farming models put into production.

In 2016, the province deployed rice production according to VietGAP standards in association with businesses consuming 100 hectares per year, Nga said.

From 2017 to 2021, more than 50,000 farmer households and 50 co-operatives successfully applied the rice production programme to reduce greenhouse gas emissions, the director said.

Despite having many strengths and long-term methods of intensive rice cultivation, building a brand of the Thái Bình rice in the domestic market and export market has been a challenging issue for many years.

Currently, in the province, there are about 200 rice milling establishments, with a total capacity of 200,000 tonnes per year.

Phạm Ngọc Hưng, director of Khang Long Food Company in Kiến Xương District, said that the lack of a rice drying system was a serious shortcoming of the province's rice production.

"To improve the quality of rice, post-harvest preservation is also an important issue that needs to be taken care of," Hưng. "The number of standard drying factories in the province is very few."

According to the local agricultural sector, the province has 10 dryers of all kinds used in milling factories with a capacity of 20-40 tonnes per batch.

The drying capacity is too small compared to the yield at harvest in the crops.

Rice production in Thái Bình Province still faces many barriers such as the small size of fields (average 0.2 ha per household), the ineffective role of agricultural service co-operatives, lack of a link between farmers and farmers, and farmers with businesses, and low incomes from rice production, according to the provincial Department of Agriculture and Development.

"Despite implementing land accumulation and exchange cultivated plots, most rice farmers had small and fragmented areas. And their production was still done in the old-fashioned custom, so it was difficult to meet the requirements and standards of export markets," Trường said.

"The awareness of safe crop production was limited. Farmers do not have the habit of keeping production diaries. Besides, the quality, quantity and types of rice were not stable, so it was difficult to develop the market and build the Thái Bình rice brand."

Currently, 80-90 per cent of the Thái Bình farmers still dry unhusked rice under the sun after harvest, making it difficult for businesses to purchase for temporary storage because rice dried under the sun has uneven moisture and dirt that affects the quality.

Trường said that to sustain the rice market, the province needed to build linkages and supply chains, in which enterprises would play a central role in connecting the entire supply chain.

He said that enterprises would conduct market research and order farmers and co-operatives on the type, quantity and quality of rice and then consume the products.

The province needed to change its goal from quantity to quality and build commodity rice production areas with clear origins associated with enterprises.

This helped businesses to feel secure to invest and co-operate with farmers to develop the value chain of rice production in the area.

Trần Mạnh Báo, general director of the Thai Binh Seed Company, said that planning agricultural production areas was a difficult issue, but it must be determined to create a production area for commercial rice production and attract business investment.

"This is the leading key issue, which is decisive to building the Thái Bình rice brand in the future," Báo said.

According to the agricultural restructuring plan for 2021-2025, rice is classified as a competitive product of the province.

The area for planting high-quality and organic rice will be expanded according to each region’s soil.

With the current planting area and productivity scale, rice production in Thái Bình Province has almost reached the required development conditions. Therefore, changing the mindset from producing quantity to quality and building a rice brand is considered a necessary breakthrough in rice production. — VNS

'Rice hometown' Thái Bình Province strives to enhance rice quality, branding have 1090 words, post on vietnamnews.vn at June 29, 2022. This is cached page on VietNam Breaking News. If you want remove this page, please contact us.