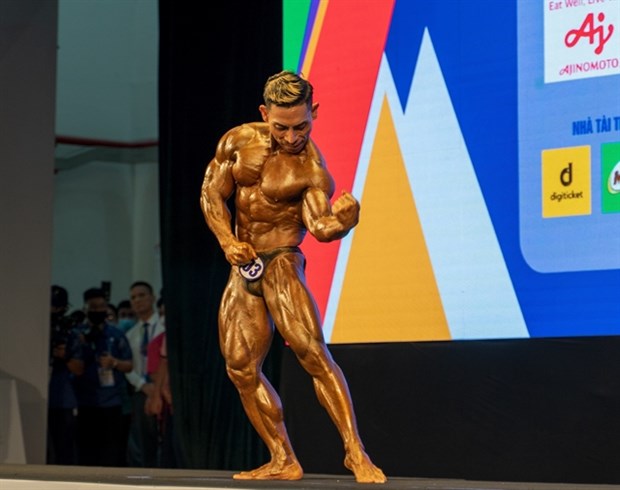 Pham Van Mach competing in the SEA Games 31 last month. He will take part in the Asian Bodybuilding and Physique Sports Championship in mid-July in Maldives. (Photo: VNA)

Hanoi (VNS/VNA) – SEA Games champion Pham Van Mach is targeting a gold medal in his return to the 54th Asian Bodybuilding and Physique Sports Championship next month in the Maldives.

Mach is one of the best bodybuilder s in Vietnam, competing in the men’s 55kg category and having won several national championships. The An Giang province-born athlete grabbed five world championship gold medals in 2001, 2009, 2010, 2014 and 2017.

He also triumphed in the continental competition eight times, taking seven titles in a row from 2004 to 2012, and another in 2014.

At last month’s SEA Games 31, the 46-year-old athlete overcame all other rivals to secure his second Games gold.

The title was a strong push for him to train hard in preparing for the Asian event on July 15-21. A total of 51 events will be organised in the first three days before the Annual Congress from July 17.

Apart from Mach, other in-form athletes such as Dinh Kim Loan and Tran Hoang Duy Thuan, who also won titles in recent SEA Games, will also compete in the Maldives.

At the upcoming championship, coach Nguyen Van Hai does not set any goals for the team because there will be many powerful athletes at the event, the first in three years. He expects there to be a high level of competitiveness./.

Pham Van Mach to attend Asian bodybuilding competition next month have 361 words, post on en.vietnamplus.vn at June 28, 2022. This is cached page on VietNam Breaking News. If you want remove this page, please contact us.