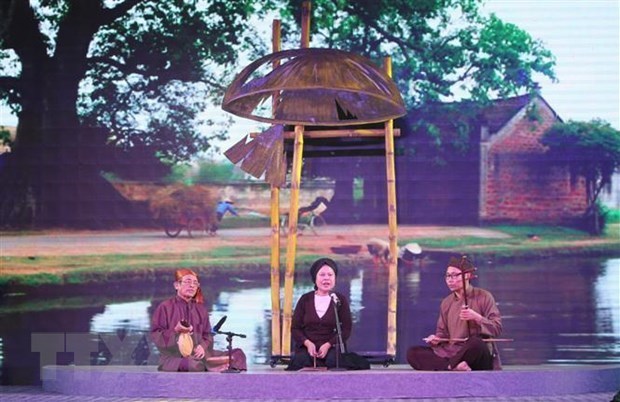 Ninh Binh (VNA) – "Xam" (blind wanderers' music) is a centuries-old singing style of the Vietnamese people, which has long been recognised as an important part of the nation's intangible cultural heritage.

Back in the 13th century, there was a tale about a prince who met a fairy, who gave him a magic instrument and taught him how to play and sing the most delightful way. The kind-hearted Prince later taught the music to his citizens to help them deal with the hardships of life. The music that comforted people was "Xam" singing.

The singing is mainly found in the countryside and is mostly performed by poor artists who sing for a living, expressing optimism, humour and philosophy about life. The performances stem mostly from the northern region. In the past, most of "Xam" performers were blind.

During the war time and the early 20th century, crowded trams, markets and street corners were turned into stages for buskers.

In the past, "Xam" singing was not only performed at crowded trams, car stations, markets and street corners, but also at important events like weddings, funerals, death anniversaries, thus, there were available different types of "Xam" songs to fit the events and environment.

“Xam" singing is very diverse in its styles and performance environments. In the past, "Xam tau dien" or "Tram xam", a unique "Xam" singing style was performed on crowded trains or car stations. The trams became ideal stages for artists to tell their stories through the melodies of the songs. "Xam cho" is a kind of "Xam" singing performed at the market place to catch people's attention. Although the markets were noisy, the sound of "Xam" songs was heard because of the drum's strong beats and unique melodies. And, "Xam sai", which is a little bit enigmatic and mystical, is performed at worshiping ceremonies.

Among the traditional Vietnamese art forms, "Xam" is something very simple, natural and familiar in people's lives. "Xam" songs are diverse in content, but all praise the love and human values, so it's loved and treasured by all. "Xam" artists should have a very powerful voice, to sing continuously for hours without the support of techniques.

In the past, "Xam" singing was considered to be the art of the poor. "Xam" artists, who were mainly blind, not only sang, they poured their hearts out when they performed as the songs featured their truly sad stories. That's one reason why the art form became so attractive and earned the empathy of its listeners.

While many folk art genres are dying out, "Xam" singing endures and still has a place in people's hearts and the music market. The genre has its own beauty, in its tones and rhythms, attractive and gorgeous.

Yen Mo district in the northern province of Ninh Binh , which is considered the cradle of "Xam" singing, is the hometown of Meritorious Artist Ha Thi Cau (1917-2013). This is the so-called ‘last humane treasure of Xam’ and the most famous artisan of this genre.

After artist Ha Thi Cau passed away in 2013, "Xam" singing in Yen Mo district faced the risk of disappearing. Few people thought "Xam" singing would exist until now. It continues to attract more people through public performances, events, festivals and classes in many schools across the district.

In a bid to preserve and promote the value of this art genre, the People's Committee of Yen Mo district has opened many classes to teach "Xam" singing. Learners are practicing "Xam" singing in many clubs in the locality and they joined in performances to introduce and popularise the art to the public and transfer it to younger generations.

Yen Mo district is now home to 20 "Xam" singing clubs which play an important role in preserving and promoting the value of "Xam" singing and seeking UNESCO's recognition as the World's Intangible Cultural Heritage./.

Ninh Binh makes efforts to preserve and promote “Xam” singing have 913 words, post on en.vietnamplus.vn at June 30, 2022. This is cached page on VietNam Breaking News. If you want remove this page, please contact us.