With the hope of making more available Vietnamese specialties in general and thieu lychee in particular to international consumers, the Ministry of Information and Communications together with the People's Committee of Bac Giang and Hai Duong northern provinces, the two major lychee orchards of Vietnam, held a digital forum and exhibition in Hanoi on June 16.

In 2022, Vietnam is set to enjoy a bumper lychee crop, thanks to favourable weather, with output estimated at about 320,000 tonnes. With such a huge amount and given short harvest time, bolstering trade and expanding current market share, searching for new markets and diversifying distribution channels should increase consumption.

Although lychees grown in Bac Giang and Hai Duong has been shipped abroad, particularly to the US, Europe, Japan and Singapore, the amount remains modest in comparison to the output at home.

Vice Chairman of the Bac Giang People's Committee Phan The Tuan said local authorities and people have taken the initiative in connecting with businesses. So far, some 200,000 tonnes of thieu lychees have been harvested and sectors at all levels stand ready to provide support in production and sales.

He went on to say that Bac Giang holds in high regard all markets at home and abroad. The province is putting thieu lychees for sale at supermarkets and online marketplaces and at the same time shipping the tropical fruit to 30 countries and territories, with major markets including China, Singapore, Japan, Saudi Arabia and the US.

In particular, Bac Giang exported over 2 billion USD worth of product to the US last year. Meanwhile, many fruits from the US have long been present in the province such as apple, grape, and strawberry. 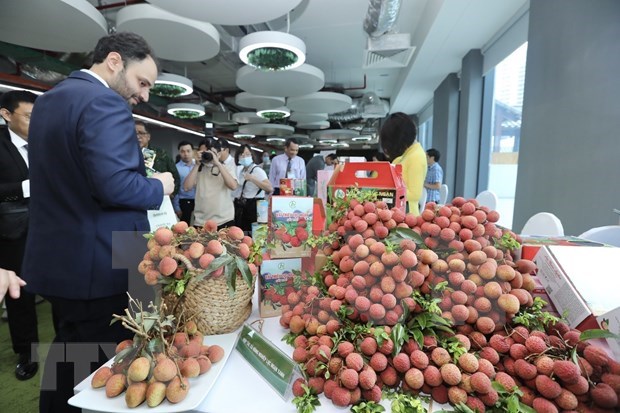 The forum draws the participation of embassies and trade office at home and abroad. (Photo: VNA)

For his part, Tran Van Quan, Vice Chairman of the Hai Duong People's Committee said the province is home to an excess of 9,000 ha of lychees yielding 60,000 tonnes each year. About half of the amount is earmarked for the domestic market, 40 percent goes to traditional destinations and the rest to high value markets like the US and Japan.

He affirmed that the province is looking to build a global brand for thieu lychee and to actualise such a target, Hai Duong over the years has rolled out measures to build high quality cultivation zones serving exports.

The province has partnered with scientific agencies to come up with new varieties and diversify products, Quan underlined.

In late May, Hai Duong exported 3 tonnes of lychees from the first batch of the 2022 crop to the UK, Germany, and the Netherlands.

Speaking at the event, Deputy Minister of Information and Communications Pham Anh Tuan stressed that the forum was held with the hope of gradually shifting from traditional methods to new ones and promoting local specialties to consumers across the globe.

The forum drew the participation of staff from the embassies of Indonesia, Laos, Sri Lanka, India, Pakistan, Iran, Japan and the Philippines, to name but a few, together with representatives from diplomatic corps, international organisations, trade agencies and Vietnamese and international enterprises.

Of note, within the framework of the forum, a digital exhibition with digital booths was launched at https://vaithieuexpo.vnexpress.net. With information available in 16 languages, notably German, Russian, Korean and Thai, the exhibition offers an official information platform for stakeholders of lychee in particular and farm produce at large./.

New markets sought to take Vietnam’s lychee global have 698 words, post on en.vietnamplus.vn at June 17, 2022. This is cached page on VietNam Breaking News. If you want remove this page, please contact us.