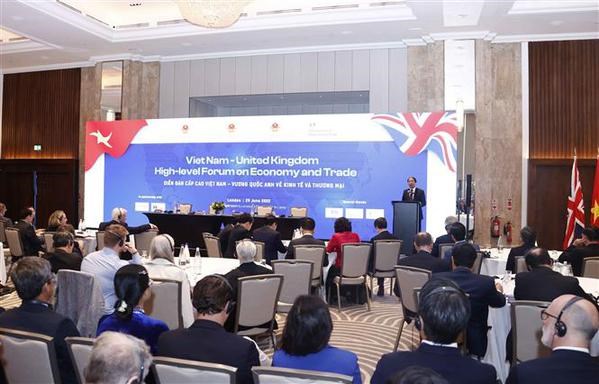 An overview of the forum (Photo: VNA)

Hanoi (VNA) – National Assembly Chairman Vuong Dinh Hue attended the Vietnam-UK high-level forum on economy and trade in London on June 29 (local time), as part of the leader's ongoing visit to the UK.

Addressing the event, Deputy PM Thanh highlighted important progress in the Vietnam-UK Strategic Partnership , as well as great chances for both sides to bolster their ties from the UK-Vietnam Free Trade Agreement ( UKVFTA ).

He underlined that both sides should optimise advantages from the deal by encouraging the promotion of the two-way trade and investment, and creating favourable conditions for enterprises of both sides to explore each other's market and foster connection, thus striving for a trade value of over 10 billion USD by 2023.

Thanh affirmed Vietnam’s high political determination in realising commitments made at the 26th UN Climate Change Conference (COP26), stressing that Vietnam hopes the UK Government and businesses will support the country in technology, finance and human resources, especially during the process of switching from fossil fuels to green energy.

Vietnam calls on Britain firms to invest more in areas of green growth, digital transformation, processing-manufacturing, finance, banking, education-training, innovation and pharmacieuticals, he stated, pledging that the Government will create a best business environment for them. 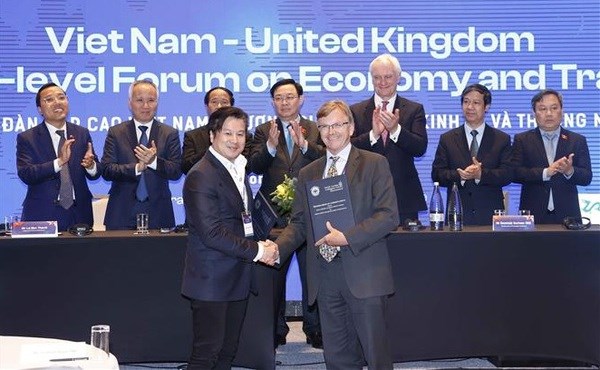 NA Chairman Vuong Dinh Hue witnesses the exchange of cooperation agreements between businesses and localities of Vietnam and the UK (Photo: VNA)

For her part, Trevelyan spoke highly of the Vietnamese market, predicting that by the end of this decade, Vietnam will become one of the 30 largest economies in the world. She affirmed that trade ties with Vietnam play an important role in the UK's trade policy.

The Britain official said she hopes UK's green industries will play a greater role in supporting Vietnam in the path towards green enegy, adding green finance businesses of the UK are also interested in Vietnam.

Trevelyan said that the UK hopes to cooperate closely with Vietnam in turning Ho Chi Minh City into a full financial centre through support in financial and market reform, and cooperation in digital infrastructure development, education and training.

She said the UK wishes to increase its interaction with the Indo-Pacific region, underlining that Vietnam plays a key role in helping the UK become the first dialogue partner of the ASEAN and foster cooperation with the region.

The official thanked Vietnam for assisting the country to join the Comprehensive and Progress Agreement for Trans-Pacific Partnership (CPTPP).

Mentioning Vietnam's preparations to overcome challenges in 2022 and 2023 amid the changing world situation, the Vietnamese NA leader said that as an economy with a high level of openness, Vietnam suffers from all changes in the world.

However, even in the global crisis period of 2008-2009 or in the COVID-19 period in 2020-2021, Vietnam still maintained positive growth at 2.91% in 2020 and 2.58% in 2021, and is growing strongly currently, manifesting Vietnam's great efforts. Particularly, while the world is facing a high inflation in the first half of this year, Vietnam managed to keep it at 2.45% with stable macro balances.

Vietnam aims to become a high middle-income country in 2030 and a developed country with high income in 2045, he said, adding that it has kept targets in its financial, budget and investment plans for the next five and 10 years unchanged.

The leader underlined that the Vietnamese NA has worked to support the Government through a "soft ecosystem" with assistance in fiscal and monetary policies.

On the occasion, NA Chairman Hue witnessed the exchange of cooperation agreements between businesses and localities of Vietnam and the UK. 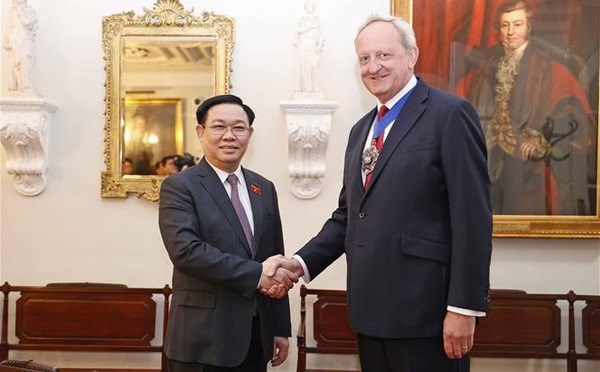 The same day, he had a meeting with Acting Mayor of the City of London Peter Estlin, during which the Vietnamese leader proposed that the British side support Vietnam in completing the legal framework in the field of finance and banking, while helping HCM City become an international financial centre.

Vietnam hopes to learn from other countries' experience and different financial centres and apply most suitable ones, he stated.

For his part, Estlin said that the UK is willing to cooperate with Vietnam at different levels, including between the UK Government and the ASEAN Community, including Vietnam, especially in financial market development.

He agreed with the Vietnamese leader's proposal on cooperation in the fields of green finance and the digitalisation of the financial market./.

NA Chairman attends Vietnam-UK high-level forum on economy, trade have 935 words, post on en.vietnamplus.vn at June 30, 2022. This is cached page on VietNam Breaking News. If you want remove this page, please contact us.