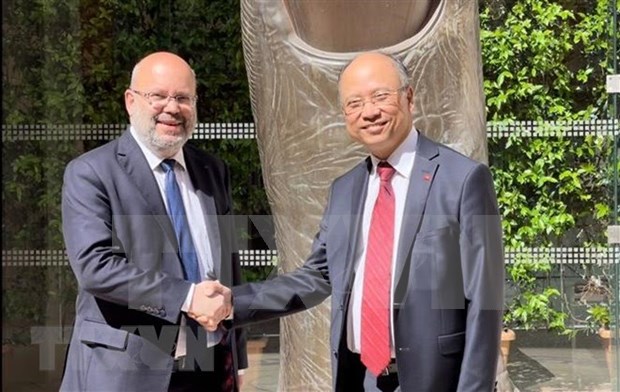 Welcoming the Vietnamese diplomat, Nice Deputy Mayor Philippe Pradal introduced the Ecovallee model that it has applied to remake the sustainable planning for the Var River delta region.

He said Nice is willing to share experience with its Vietnamese twinned city of Can Tho in climate change response and ecological transition.

Pradal spoke highly of cooperation programmes between Vietnam and France in French teaching and the exchange of medical and trade lecturers, expressing hope to expand collaboration to digitalisation training.

He highlighted Nice's strengths in organice functional food and showed a hope to seek cooperation with Vietnam in exploiting herbal medicine materials and traditional medicine development.

He said he hopes both sides will strengthen partnership in heritage, while joining the 12th Vietnam-France conference on decentralised cooperation that is slated in Hanoi in December, and responding to activities to celebrate the Vietnam-France ties in 2023.

Ambassador Thang welcomed the twin relations between Nice and Can Tho city in health care and education, as well as cooperation between Sofia Antipolis University and Da Nang University. He encouraged them to continue to strengthen their partnership, and suggested that Nice businesses seek cooperation opportunities in health care and, digitalisation and aquatic farming in Vietnam.

At his working session with the Chamber of Commerce and Industry of Nice Côte d’Azur, Ambassador Thang introduced the investment and business opportunities in Vietnam as well as Vietnam's chances in France. He said that FPT Group's representative office in France, which is based in Nice has attracted the interest of many local firms.

During his stay in Nice, Ambassador Thang also met representatives from the Vietnamese community and students in Nice and neighbouring areas. He asked the community to maintain Vietnamese language teaching and learning activities as well as the Vietnamese cultural identity, while helping foster connections between the host country and Vietnam.

On May 2, the diplomat and his entourage visited an exhibition of paintings by Vietnamese King Ham Nghi (1870-1947) at Nice Museum for Asian Arts.

Speaking to Vietnam News Agency correspondent in Paris following the trip, Ambassador Thang expressed his pleasure at the outcomes of the visit. He said that the two sides mentioned many traditional cooperation areas between Nice and its Vietnamese partners such as Can Tho and Da Nang.

Local leaders and businesses also showed their interest in the Vietnamese market, not only in trade and investment but also in culture, museum, tourism and training. Particularly, the restoration and the making of dossiers for heritage to seek UNESCO recognition is a strength of Nice, which is also an area of Vietnam's interest.

Deputy Mayor Pradal said that the potential for cooperation between Nice and Vietnam is great thanks to a large Vietnamese community in the city. In addition, the collaboration between the universities of Nice and Vietnam has also contributed to strengthening cultural, scientific, technical and technological exchanges, helping the two sides to get better understanding of each other.

For his part, Olivier-Henri Sambuchi, Deputy President of the Mission for Nice’s candidacy for inscription by UNESCO on the World Heritage List, also saw the great potential for cooperation between the coastal tourist city and Vietnam in the field of heritage conservation and tourism development and wishes to cooperate with Vietnam in these fields.

Located on the shore of the Mediterranean, Nice is the fifth biggest city in France, known worldwide for resort tourism. The Sofia Antipolis Hi-Tech Park, which includes universities, research centers and technological applications, is the largest model of technological valley in France. With a long tradition of 200 years, as well as numerous relic sites with high cultural and historical value, Nice was recognised by UNESCO as a World Heritage Site in July 2021./.

Vietnam seeks stronger partnership with France's Nice city have 722 words, post on en.vietnamplus.vn at May 3, 2022. This is cached page on VietNam Breaking News. If you want remove this page, please contact us.