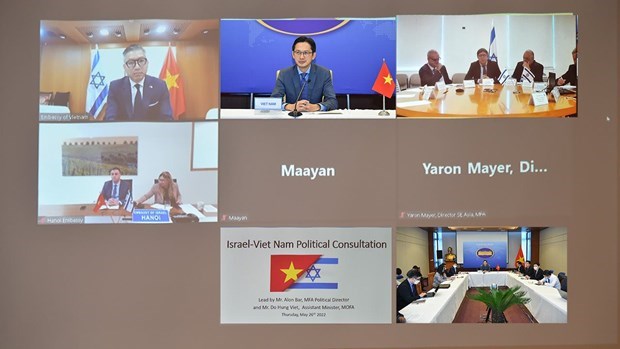 The conference was held via videoconference on May 26 (Photo: VNA)

Viet and Bar briefed each other on the political and socio-economic situation in their respective countries, and highly valued the positive progresses in the all-round cooperation between Vietnam and Israel over the years, especially in politics, diplomacy, economy, science-technology, and startup.

Viet welcomed the organisation of the fourth consultation conference, describing it as an effective mechanism for reviewing and enhancing the effectiveness of the cooperation between the two countries.

He affirmed that Vietnam highly values and hopes to promote multifaceted ties with Israel , and thanked the Israeli Government and businesses for assisting Vietnam in responding to COVID-19.

For his part, Bar said Israel and Vietnam boast supplementary advantages and have high potential to further promote their cooperation in the time to come.

As Vietnam and Israel will celebrate the 30th anniversary of their diplomatic relations in 2023, the two sides agreed on many specific measures to further beef up the partnership between the two countries, including increasing delegation exchange and online meetings of leaders of the two countries as well as representatives of ministries, sectors and localities.

They concurred that the two countries should organise activities of cooperation mechanisms, including the third meeting of the Inter-Governmental Committee, and speed up the negotiation of important cooperation agreements such as the Vietnam-Israel Free Trade Agreement and a labour agreement. The two sides should also boost cooperation in investment and science-technology, and consider the launch of a direct air route to facilitate people-to-people exchange, and increase Israel's support to startup businesses and projects of Vietnam.

The two sides also took the occasion to exchange views on regional and international issues of mutual concern./.

Vietnam, Israel convene fourth political consultation have 459 words, post on en.vietnamplus.vn at May 26, 2022. This is cached page on VietNam Breaking News. If you want remove this page, please contact us.