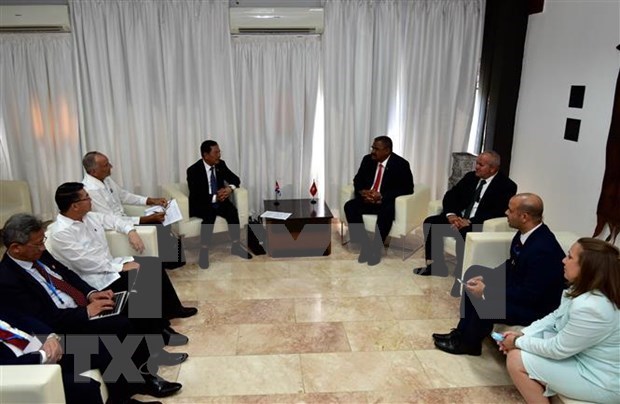 An overview of the meeting (Photo: VNA)

Havana (VNA) – A delegation of Vietnam's Supreme People's Court led by Deputy Chief Justice Nguyen Van Du paid an official visit to Cuba from May 18-21 to promote cooperation between the two court sectors and attend the 10th International Meeting on Justice and Law.

At a working session with the Chief Justice of Supreme People’s Court of Cuba, Rubén Remigio Ferro, the Vietnamese deputy chief justice informed the host on the main reforms in the Vietnamese court system in the recent past, including enhancing the publicity of sentences, improving judicial service quality for the public and modernising material conditions.

He stressed that in its judicial reform strategy, the Vietnamese State aims to enhance the capacity of judges, build electronic courts and intensify international experience exchange.

The Cuban chief justice also shared the orientation for the modernisation of the Cuban court system, and noted the similar points in the process of completing the judicial system in the two countries.

He paid attention to Vietnam's experience in judicial reconciliation and suggested holding knowledge exchanges or thematic workshops on the issue.

On the occasion, the Vietnamese delegation handed over some laptops as a gift from the Vietnam Supreme People's Court to the Cuban counterpart.

The International Meeting on Justice and Law, in its tenth edition, has established itself as a scientific-legal space of great prestige at the national and international level, in which presidents and magistrates of supreme courts of Justice, specialists, academics and professors from different latitudes participate./.

Vietnam, Cuba promote cooperation in justice have 346 words, post on en.vietnamplus.vn at May 21, 2022. This is cached page on VietNam Breaking News. If you want remove this page, please contact us.