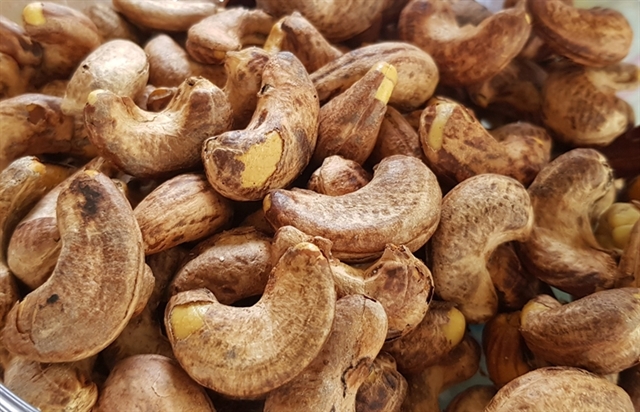 HÀ NỘI — Enterprises should prioritise investment in developing value-added cashew products to avoid losing its market share instead of only focusing on wholesale, according to experts.

Việt Nam’s cashew nut is dominant in the EU market, however, it is mainly raw material and there are very few processed products, especially roasted and spiced products according to the taste of EU customers.

"Diversifying cashew products has also pushed the demand for those products up in the EU market. Domestic enterprises need to have market research and investment in the processing stage to maintain their market shares in this market,” Vũ Anh Sơn, a representative of the Việt Nam Trade Office in France, told Công thương (Industry and Trade) newspaper.

In addition, to maintain the market shares of Việt Nam’s cashew nuts in the EU market, experts have recommended that the domestic enterprises should take consultancy from law firms on EU regulations on imported goods, including cashews, because the regulations are very complicated and are frequently updated. They also need the law firms’ support during implementing business transactions to avoid risks.

In the food sector, the EU has no mandatory regulations, but food safety certifications, social responsibility certifications, and packaging and label requirements are notable plus points for the businesses when exporting foods to the EU, according to the experts.

Organic cashew products are very popular in the EU so this is a potential niche market for Vietnamese businesses.

However, the experts have warned that Việt Nam’s cashew nuts have faced competition in the EU market. Specifically, in 2019-2020, Việt Nam’s cashew market shares in France decreased from 61 per cent to 46 per cent. At supermarkets and hypermarkets, there are almost no Vietnamese-branded cashew products because the domestic enterprises have mainly focused on wholesale, not retail.

Sơn said the cashew nut supply chain in France had changed markedly with declining volumes of the big suppliers, such as Việt Nam and India, and the emergence of some other suppliers, especially Cambodia.

He also added that EU enterprises could invest in the African region to diversify the supply of cashew nuts and avoid dependence on Việt Nam and other Asian countries.

At the meeting, representatives from the Việt Nam trade offices in Italy and France, the Vietnam Cashew Association, and representatives of some cashew importers from Austria, the Netherlands and Switzerland provided the market information and shared business experiences in the EU markets with the domestic enterprises.

In April, Việt Nam’s cashew exports reached 49,000 tonnes, earning US$290 million, up 22 per cent in volume and 21 per cent in value on month. Especially, EU countries such as the Netherlands, Germany, the UK and Italy are in the top ten export markets of Vietnamese cashews.

Việt Nam targets to gain a cashew nut export turnover of $3.8 billion this year, an increase of $200 million compared to last year.

The growth of cashew nut exports to the EU contributed significantly to the export growth of the domestic cashew industry. The tax rate for cashew products imported into the EU from Việt Nam was reduced to zero after the Việt Nam-EU Trade Agreement (EVFTA) took effect on August 1, 2020, according to the Trade Promotion Agency.

This reduction is very important because before having the EVFTA, the tariff for Vietnamese cashew nuts imported to the EU ranged from 7 per cent to 12 per cent.

In the European market, Vietnamese cashew nuts are exported to many western and eastern European countries, including Germany, the Netherlands, France, Belgium, Russia, Poland, Romania and Ukraine.

Of these, the Netherlands and Germany in the EU bloc are now important trading hubs for importing Vietnamese cashews for re-export to neighbouring countries. VNS

Việt Nam should prioritise value added cashew products for EU market have 983 words, post on vietnamnews.vn at May 21, 2022. This is cached page on VietNam Breaking News. If you want remove this page, please contact us.