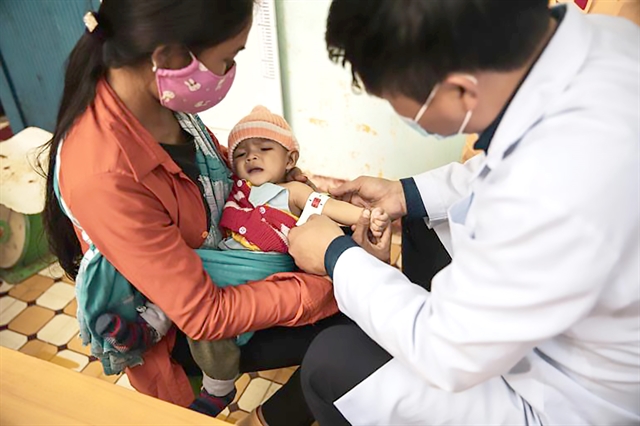 Hồ Thị Ngọc Hằng, 6 months, weighs 5kg. Born at a weight of 2.4 kg, Hằng is a child in a Cor ethnic minority family in Quảng Ngãi. Hằng was identified as suffering from severe acute malnutrition during outreach and malnutrition screening supported by UNICEF and the National Institute of Nutrition. — Photo from UNICEF Việt Nam

HÀ NỘI — UNICEF Việt Nam calls for the inclusion of treatment for child wasting into the domestic health examination and treatment law and other long-term development funding schemes to help save the lives of many children in the country.

Child wasting refers to the most lethal form of undernutrition and one of the top threats to child survival. Around one in five deaths among children under 5 are attributed to severe wasting, which is caused by a lack of nutritious food and repeated bouts of diseases such as diarrhoea, measles and malaria, which in turn compromise a child's immunity.

UNICEF continues to release global evidence on the rising levels of malnutrition in children. All forms of this disease are prevalent in Việt Nam, where the estimate based on 2019 annual nutrition surveillance revealed that 230,000 under-5 children suffer from severe acute malnutrition (SAM) annually.

Malnutrition is listed as a disease in the World Health Organization’s (WHO) International Classification of Diseases, and it is a preventable and treatable disease. Wasting, defined as low weight-for-height, is the most visible and lethal type of malnutrition.

Severe wasting, where children are too thin for their height resulting in weakened immune systems, is the most immediate, visible and life-threatening form of malnutrition. Worldwide, at least 13.6 million children under 5 suffer from severe wasting, resulting in one in five deaths among this age group.

Given the close links between SAM, stunting and mortality, interventions aimed at the prevention and treatment of SAM will help to reduce both child mortality and stunting further.

Prevention and treatment of children with SAM are one of the critical objectives of the National Nutrition Strategy 2021-30 and national targeted programmes.

“However, there are no policies nor funding sources identified in central or local budgets for Integrated Management of Acute Malnutrition interventions, with 90 per cent of SAM cases being untreated. Now’s the time to accelerate ongoing efforts by taking action to include examinations and treatment of SAM children in the revision of the Law on Medical Examination and Treatment.”

The nationwide expansion of this intervention requires a funding mechanism for managing and treating children with SAM. To reach every child with life-saving treatment, UNICEF is calling for countries to include therapy for child wasting under health insurance and long-term development funding schemes so that all children can benefit from treatment programmes.

Given that SAM can only be treated effectively by using specialised therapeutic nutrition products that need to be prescribed under medical guidance, the treatment of SAM requires a specific legal framework to enable access in Việt Nam.

Amendment of the various laws related to health which are being reviewed currently and in the near future – including the revision of the Law on Medical Examination and Treatment — offer a unique opportunity to address the poor access to treatment.

“By incorporating and specifying the use of therapeutic nutrition products for treatment for children with SAM into the amendment of laws being reviewed now, Việt Nam will pave the way to save the lives of an estimated 230,000 children every year,” Rana Flowers said.

“Otherwise, these children face the risk of dying from a disease that can be easily prevented and treated. Việt Nam has the resources and capacity to prevent these unnecessary deaths by ensuring that children with SAM have the health care and treatment they need to survive, thrive and develop their full potential.” — VNS

UNICEF calls for VN to speed up inclusion of 'child wasting' into policy have 818 words, post on vietnamnews.vn at May 20, 2022. This is cached page on VietNam Breaking News. If you want remove this page, please contact us.