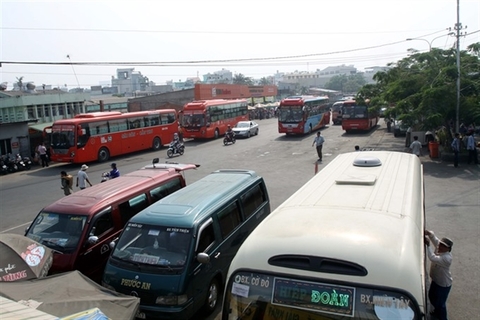 The HCM City transport industry has sought Government support to help recover from the double whammy of the COVID-19 pandemic and skyrocketing fuel prices.

Le Trung Tinh, chairman of the city Intercity Passenger Transport and Tourism Association, said the high prices of petroleum products have made it difficult for transport businesses, leading to a fresh crisis post-pandemic.

Fuel prices account for 30-50 per cent of transport costs, and so the hike in prices has created massive challenges for the industry, he said.

The Government and National Assembly should consider reducing tariffs on petroleum products such as environmental protection, special consumption and value-added taxes, he said.

"Petrol prices have surged and been forecast to rise to VND35,000 – 40,000 per litre. If it does, passenger transport firms will find it challenging to survive."

A spokesperson for Tu Vien, a firm that operates on the HCM City – Ha Noi route, said with the current price of diesel at more than VND30,000 per litre, the cost of a trip has reached some VND50 million (US$2,100).

The firm has already sold two 45-seat buses at below market prices and the remaining one is parked in Binh Duong Province due to a lack of business, he claimed.

"Transport businesses are now depending on luck. Out of 10 buses, only three have enough passengers. We lose VND5-7 million per trip."

Dao Ngoc Tuan, owner of Tuan Duyen, a bus service that operates on the HCM City – Ha Noi route, said the fuel cost per trip has doubled to more than VND30 million.

"We cannot increase ticket prices to offset the costs due to the low demand. The price of a sleeper seat from HCM City to Ha Noi is VND800,000, the same for the last seven years."

The number of passengers has fallen to 40 per cent of pre-pandemic levels, he said.

During the 210-km trip from HCM City to Gia Nghia, a bus has to pass through three toll stations and pay VND540,000, he said.

He said he planned to sell all of his five vehicles and wind up a 30 –year-old business.

Nguyen Lam Hai, head of the transport planning department at HCM City's Mien Dong Bus Station, said since March the number of passengers a day has been 10,000-10,500, or 52 per cent of pre-pandemic levels.

Almost a third of bus operators have ceased operations, he added.

The station has supported businesses by reducing rentals of counters by up to 40 per cent, but it has not helped much since the high fuel prices now account for 30-50 per cent of costs.

Tran Nhan Hau, head of operations at the Mien Tay Bus Station, too said the number of passengers is currently only half compared to before the pandemic.

He said the collection of environmental protection tax should be temporarily suspended.

Experts said the reduction of special consumption tax on fuels would help lower their costs, reducing inflationary pressure and the impact on businesses and people’s lives.

On Monday, the authority adjusted up the retail prices of oil and petrol. This was the ninth time that the petrol prices have been adjusted this year but only three of them was downward.

Transport sector beseeches support amid soaring fuel costs have 828 words, post on bizhub.vn at May 25, 2022. This is cached page on VietNam Breaking News. If you want remove this page, please contact us.