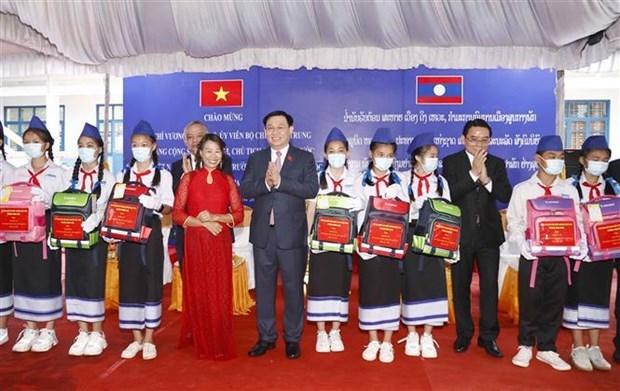 During the trip, the top legislators of Vietnam and Laos held talks to review cooperation between the two NAs, particularly the implementation of their collaboration pact signed in 2017. The leaders also put forth orientations for collaboration in the time to come and signed a new cooperation agreement.

She said a highlight of the visit was the two NA leaders' participation in the groundbreaking ceremony of the Laos-Vietnam Friendship Park in Vientiane, a project that has been prepared for years.

The leaders also co-chaired a workshop between the two NAs on policies and mechanisms for post-COVID-19-pandemic recovery, Sounthone said, adding that its outcomes will result in practical efforts.

Sounthone said these activities demonstrated the close and special ties between the two nations, which remain unchanged despite global changes.

Concluding the interview, she expressed her belief that Hue's official trip made a significant contribution to strengthening the great friendship, special solidarity, and comprehensive cooperation between Laos and Vietnam./.

Top Vietnamese legislator’s official visit to Laos a success: Lao NA Vice President have 406 words, post on en.vietnamplus.vn at May 18, 2022. This is cached page on VietNam Breaking News. If you want remove this page, please contact us.