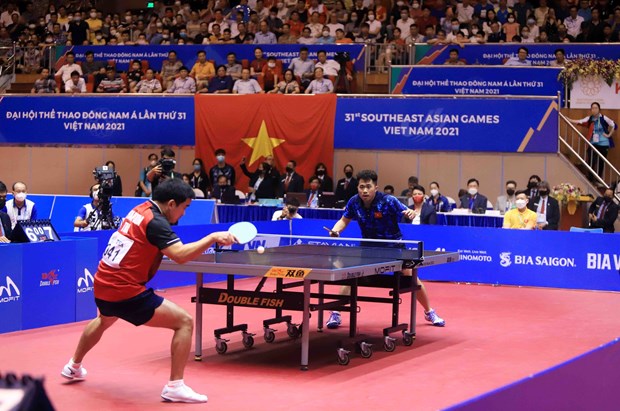 This is the most awaited match by table tennis fans at the regional sports event.

Tuan was the last hope of gold of the Vietnamese table tennis team after his teammates lost in all six out of seven events at the tournament.

The Thai player had two points ahead of Tuan at the beginning of the first set. However, with his calmness, confidence, and solid defence, Tuan made good use of his “right-handed” attacks and won the first set 11-7.

In the third set, Sanguansin returned strong and beat Tuan 11-8.

However, Tuan reversed the situation and defeated the Thai rival 11-7 in the fourth set and 13-7 in the last set.

With this triumph, the Vietnamese table tennis team completed the gold medal target set for the tournament.

SEA Games 31: Vietnam grabs gold medal in men’s singles table tennis have 358 words, post on en.vietnamplus.vn at May 21, 2022. This is cached page on VietNam Breaking News. If you want remove this page, please contact us.