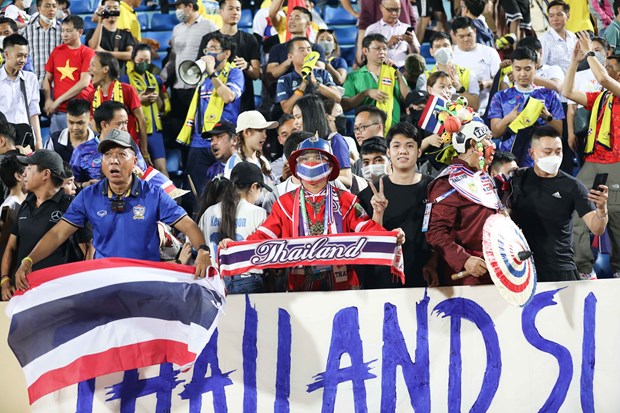 Supporters at a match of Thailand in SEA Games 31 (Photo: VNA)

Hanoi (VNA) – Matches of Thailand in the men's football at the ongoing SEA Games 31 in Nam Dinh province's Thien Truong Stadium attracted a large number of spectators compared to other fixtures, reported a Thai newspaper.

Siamsport recently published an article entitled 'Favourite of local football fans!', highlighting the two games featuring the Thai team in Group B have seen the highest audience in the tournament so far.

Thien Truong Stadium, with a seat capacity of 30,000, was nearly full in both Thailand's faceoffs with Malaysia and Singapore.

The newspaper underlined that most of the spectators were Vietnamese, although hosts Vietnam are in a different group.

Previously, ASEAN Football page published photos of Thien Truong Stadium on May 7 when it hosted two games of Group B.

"What an atmosphere! 30,000 fans in Thien Truong Stadium tonight!" it wrote.

The site stated this is the new record for the match with the most spectators at a neutral venue in SEA Games history.

Two matches of Vietnam against Indonesia and the Philippines held at the 18,000-seat Viet Tri Stadium in Phu Tho province in Group A were among five highest-attended ones, with more than 16,180 fans attending each game.

SEA Games 31, themed "For a Stronger South East Asia", is being held in Hanoi and 11 neighbouring provinces and cities until May 23.

It features 40 sports with 523 events, attracting around 10,000 participants. The biennial event was initially slated for late 2021 but delayed due to the COVID-19 pandemic./.

SEA Games 31: Thai newspaper in awe of Vietnam football fans’ support have 366 words, post on en.vietnamplus.vn at May 14, 2022. This is cached page on VietNam Breaking News. If you want remove this page, please contact us.