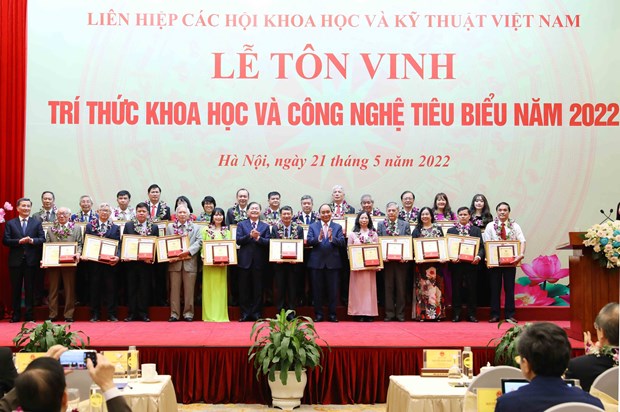 Hanoi (VNA) – Amid the Fourth Industrial Revolution , the Party has defined that science-technology and innovation development is a strategic breakthrough for national development, and the contingent of scientists is the core of this process, stated President Nguyen Xuan Phuc at a ceremony held in Hanoi on May 21 to honour 106 outstanding intellectuals in the field of science and technology in 2022.

“The dream of a prosperous Vietnam can only be realised under the guidance of the light of knowledge,” he said.

Addressing the event held by the Vietnam Union of Science and Technology Associations (VUSTA), the State leader highlighted the great attention that the Party and State have given to the development of science, technology and innovation as well as intellectuals in the field.

He hailed the VUSTA’s role in connecting Vietnamese scientists inside and outside the country over the past 40 years, significantly contributing to the country's socio-economic development, political and security-defence stability.

He noted that so far, the union has gathered more than 3.7 million experts, including 2.2 million in the field of science and technology, accounting for 32.5 percent of the total intellectual number of the country.

The contingent of scientists have built up the national innovative capacity, the President said, noting that last year, Vietnam became one of the top 45 leading countries in the world in terms of innovation, and took the lead in the list of middle-income economies in Global Innovation Index (GII).

He asked the VUSTA, as the representative body for scientists and intellectuals, and an important part of the country's political system, should play a greater role in giving advice to the Party, State and Government on science-technology and innovation policies as well as financial mechanisms to better unite Vietnamese intellectuals, contributing to successfully realise national development goals in the new period.

Scientist contingent the core of science-technology, innovation development: President have 460 words, post on en.vietnamplus.vn at May 21, 2022. This is cached page on VietNam Breaking News. If you want remove this page, please contact us.