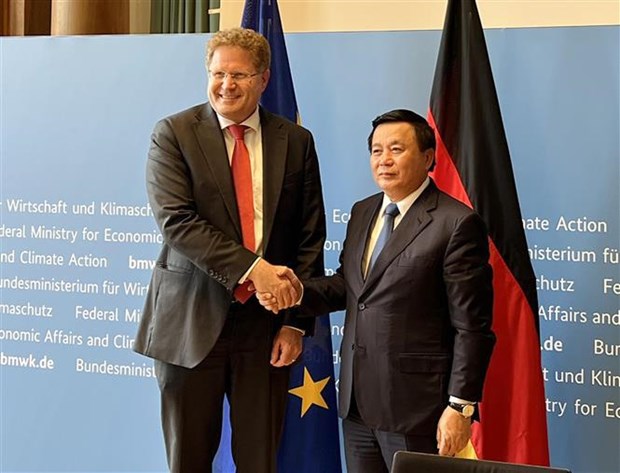 Berlin (VNA) – President of the Ho Chi Minh National Academy of Politics (HCMA) Prof. Dr. Nguyen Xuan Thang has been busy on his visit to Germany from May 14 – 19, with renewable energy and climate action high on his working agenda.

Thang co-chaired the seventh theory dialogue between the Communist Party of Vietnam (CPV) and the Social Democratic Party of Germany (SDP), during which the two parties exchanged views on a number of both theoretical and practical matters.

Discussions have placed an emphasis on Vietnam's energy transition strategy to ensure national energy security and fulfil international commitments; developing green agriculture in Vietnam in the era of the Fourth Industrial Revolution; green growth and climate resilient models in some Vietnamese localities; and the path towards an eco-social market economy and advantages and challenges to energy transition and green agriculture development in Germany.

The Vietnamese official also had a meeting with SPD Co-leader Lars Klingbeil. He spoke highly of the long-standing friendship between the two parties and the SPD's efforts in co-hosting the seventh dialogue, and proposed both sides to further expand their relations in the coming time, contributing to accelerating the Vietnam-Germany strategic partnership.

He briefed his host on Vietnam's socio-economic recovery post-pandemic and the State and Party's policies in climate change response, energy transition, green growth and sustainable development. He also proposed both countries to strengthen the bilateral strategic partnership through cooperation in energy transition, green growth, green agriculture, and harmoniously resolving social, economic, environmental and security problems, contributing to peace, dialogue, cooperation and development in the region and the world.

Thang later met State Secretary at the German Federal Ministry for Economic Affairs and Climate Action Patrick Graichen; State Secretary and Special Envoy for International Climate Action Jennifer Lee Morgan; Minister of State in the Ministry of Labour, Social Affairs, Transformation and Digitalisation of the State of Rhineland-Palatinate Alexander Schweitzer; and Chairwoman of the Parliamentary Friendship Group for Relations with the ASEAN States.

The German officials highly valued Vietnam's role and position regionally and globally, affirming that the Southeast Asian country remaining a key partner of the region and the two countries' strategic partnership is growing constantly.

Additionally, they appreciated Vietnam's commitments made at the 26th UN Climate Change Conference (COP26) last year and its achievements in transitioning towards renewable energy./.

Renewable energy, climate action prioritised in Party official’s visit to Germany have 562 words, post on en.vietnamplus.vn at May 19, 2022. This is cached page on VietNam Breaking News. If you want remove this page, please contact us.