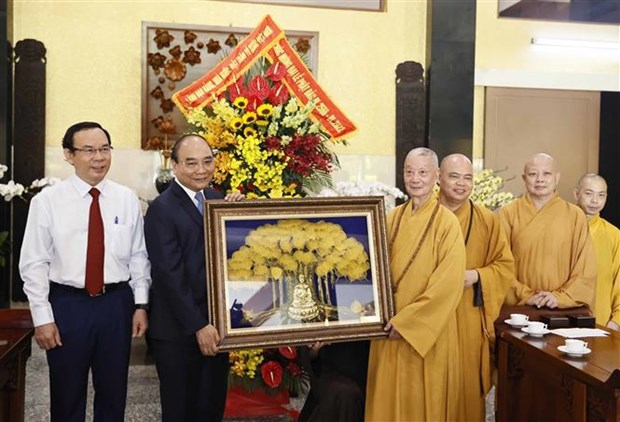 President Phuc affirmed that since Buddhism was introduced into Vietnam, Lord Buddha’s birthday has become a sacred holiday for Buddhists nationwide, and also a common spiritual and cultural festival of the society, bringing a message of love, solidarity, harmony and development.

The consistent policy of the Party and State regarding religions is to respect and ensure people’s right to freedom of belief and religion, and create favourable conditions for dignitaries and followers of religions to well perform their spiritual practice and fulfill their duties to the nation, he affirmed.

The State leader also expressed his hope that the Vietnam Buddhist Sangha (VBS) will continue to demonstrate its role and prestige in building the great national unity and the solidarity among religions; promote the power of religions, beliefs and culture; and affirm and spread the preeminent values of a peaceful religion, thus contributing to further developing the country.

Most Venerable Thich Tri Quang, Acting Supreme Patriarch of the Patronage Council of the VBS and head of Hue Minh pagoda, and Most Venerable Thich Thien Nhon, Chairman the VBS’s Executive Council and head of Minh Dao pagoda, expressed their gratitude for the attention paid by the State leader and all-level authorities. They said they hope the President will continue caring for and creating favorable conditions for the Buddhist community in Buddhist activities and joining hands in building a more prosperous Vietnam.

Also on May 14, President of the Vietnam Fatherland Front Central Committee Do Van Chien visited the office of the VBS at Quang Duc Zen Monastery in District 3 and the Vietnam Pure Land Buddhist Association at Hung Minh Tu pagoda in District 6 of Ho Chi Minh City./.

President, VFF leader congratulate Buddhists on Lord Buddha’s birthday have 577 words, post on en.vietnamplus.vn at May 14, 2022. This is cached page on VietNam Breaking News. If you want remove this page, please contact us.