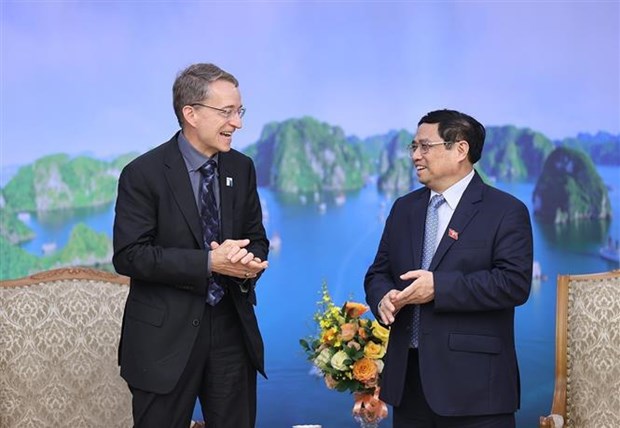 Hanoi (VNA) – Prime Minister Pham Minh Chinh applauded Intel's decision to expand its investment in Vietnam while receiving its CEO Patrick Gelsinger in Hanoi on May 27.

The PM spoke highly of the US firm's engagement in the building of a digital economy and society in Vietnam, which matches Vietnam's development priorities as well as the two countries' relations.

He asked Intel to continue investing in Vietnam in both depth and breadth, noting that the Government is prioritising the investments applying high and clean technology and contributing to the development of digital economic infrastructure and high-quality human resources.

PM Chinh also called for Intel to help the country create an ecosystem for innovation and startups, improve labour productivity, and diversify supply chains, adding that the Vietnamese Government is ready to support businesses, including FDI companies , to operate fruitfully.

He voiced his belief that with the existing foundation and determination, Intel's investment in Vietnam will reach a new level and generate more effectiveness.

For his part, Gelsinger said Intel has been investing in Vietnam for 15 years.

Agreeing with the PM's opinions, he noted during its operation in Vietnam, his corporation realised that the country boasts an industrious and creative workforce, and that it has received strong support from the Government.

Therefore, it decided to scale up its investment by multiple times, he said, perceiving that Vietnam is an attractive destination for investors thanks to its dynamic economy, high potential, and numerous cooperation chances in the areas Intel is strong at such as manufacturing, research and development.

Thanking the Government for assisting his firm to develop, the CEO expressed his hope for continued favourable policies for Intel and other high-tech companies./.

PM welcomes Intel’s investment expansion in Vietnam have 397 words, post on en.vietnamplus.vn at May 27, 2022. This is cached page on VietNam Breaking News. If you want remove this page, please contact us.