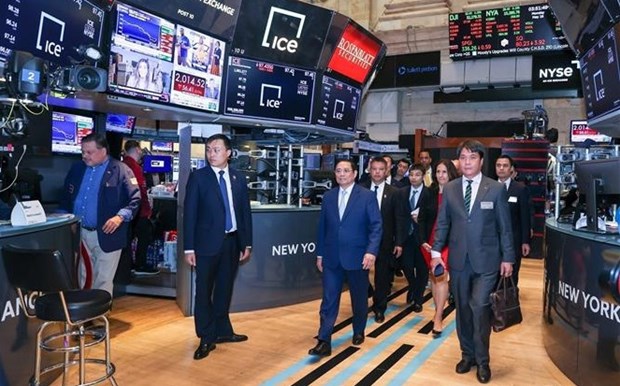 New York (VNA) – Vietnamese Prime Minister Pham Minh Chinh held a working session at the New York Stock Exchange (NYSE) on May 16 (local time) as part of his trip to the US.

In his meeting with NYSE leaders, the Vietnamese PM expressed his pleasure to visit the largest stock exchange in the world in terms of market capitalisation, and thanked them for the warm welcome and the privilege to ring the bell to end the trading session of May 16. 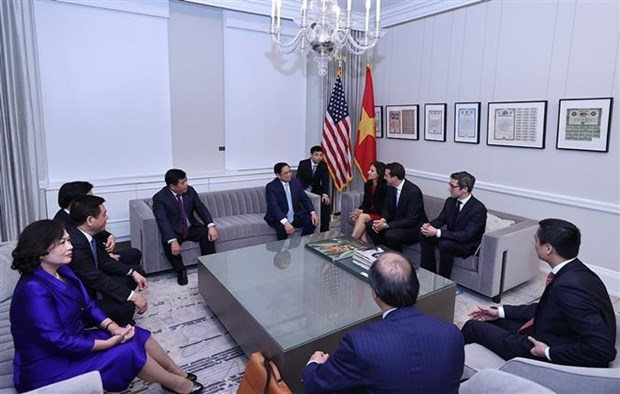 PM Chinh stressed that Vietnam is cracking down on the violations of a few unscrupulous investors in the country's stock markets to ensure its security, transparency, and sustainable development .

He asked the NYSE to cooperate and share experience in developing an effective, sustainable stock market in Vietnam as well as realising the country's ambition to successfully build a regional-level financial centre, foster the win-win partnership between the NYSE and Vietnamese agencies and companies, contributing to the development of the US-Vietnam comprehensive partnership. 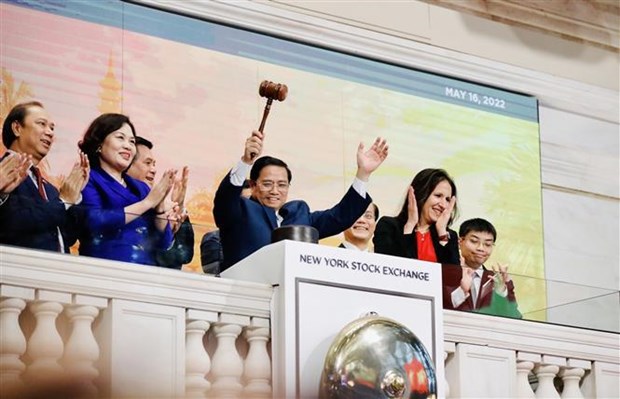 On the occasion, PM Chinh witnessed the awarding ceremony of two cooperation documents in the fields of finance, banking and investment funds between Vietnamese and US partners, including a cooperation document between Vietnam's State Securities Commission and the NYSE regarding the support to upgrade Vietnam's stock market and build a mechanism for investors to participate in the two stock markets.

The same day, the Vietnamese Government leader had a roundtable with CEOs from world-leading firms and investment funds listed on the NYSE.

PM Pham Minh Chinh has a roundtable with CEOs from world-leading firms and investment funds listed on the NYSE (Photo: VNA)

In the opening address, PM Chinh said global instabilities had impacted both Vietnam and the US, requiring companies to help address the challenges.

Vietnam in recent times had striven to keep macroeconomic stability, including exchange rates, inflation and interest rates, as well as budget revenues and expenditure balances, food security, imports and exports.

The country is currently in serious need of developing healthy, sustainable capital, monetary securities and bonds markets, according to the PM.

The PM also informed the company executives of the implementation of the recovery package worth 4 percent of the national GDP, with focus priorities being the reopening of the economy in association with raising healthcare capacity and pandemic response, ensuring social welfare and creating jobs, support for businesses, investing into infrastructures, and improving institutions and business environment.

A leader of Amphenol Corporation, who manufacture electronic equipment for supply to Boeing, Apple and Tesla, said that they wanted to switch their production lines to Vietnam and asked the PM for more information on the Government's measures to attract investment in the processing and manufacturing industry. The leader of the Amphenol Corporation added that he travelled to Vietnam when he was 20 years old and had a personal fondness for the country and its cuisine.

In response, PM Chinh said Vietnam had carried out significant reforms since 1986 with the three main pillars – cutting back on red tape, implementing multi-ownership and international integration.

To attract international investors, the PM stressed the principle of "straightforwardness, trust, responsibility" and "harmonised benefits, shared risks," between the two sides.

Vietnam was also bettering its institutions and legal framework to match its international commitments, including 15 free trade agreements (FTAs) that the country had signed, which include the most developed economies in the world, he said.

The country was also focusing on developing infrastructure, including digital transformation (e-Government, digital society, and digital economy), transport, energy and healthcare to lure in direct and indirect investors.

Vietnam was committed to building a stable and open business and investment environment, with administrative procedures handled quickly and effectively and transparently, he noted.

The country was also enjoying a high level of political and social stability, including the successful control of COVID-19, that investors could be reassured when doing business in Vietnam.

A representative of Herbalife noted that Vietnam was among the 5-6 fastest developing markets, and was one of the focus countries in the company's growth plan with very positive prospects.

The company appreciated the Vietnamese Government's efforts to collect input and feedback from businesses in the development of legal documents and policies and wanted to inquire more about what the companies could do to assist the Government.

In response, the PM said the Vietnamese Government attached great importance to the gathering of opinions from people and businesses, including foreign enterprises, for example, in the development of the draft power master plan.

In the development phase, other than State resources, the resources from the private sector and foreign enterprises would be critically needed and mobilised via a public-private partnership, PM Chinh said.

In response to Deutsche Bank's question on the support from the Vietnamese Government in helping businesses to successfully list on foreign stock markets, including the NYSE, PM Chinh said the Government had the responsibility to assist Vietnamese enterprises to grow in a sustainable, healthy and legal manner.

In the context of a fast-changing world, all Government directions and policies needed to quickly adapt to these adjustments to create the best environment for the companies, he noted, but on the other hand, the businesses themselves needed to always try their best to create a reputation domestically and overseas, actively cooperate with foreign businesses, including US businesses, to expand their capacity and operations.

The businesses would also need to focus on research and development, application of new technology and diversifying supply chains.

PM Chinh noted that many Vietnamese businesses had set up their presence in the US such as Vietcombank, FPT, and VinFast and they needed the support and cooperation of local businesses.

Goldman Sachs, the leading global investment management firm, wanted to know more about the cap of foreign ownership in the banking sector, as well as the access to and usage of foreign currencies.

In this regard, PM Chinh said Vietnam was directing ministries to study and perfect the legal framework for investment in the banking sector, enhancing the transparency of banking operations, and improving the management in line with international practices.

However, he remarked frankly that the approach of a developing economy like Vietnam "cannot possibly resemble that of developed economies like Japan, the Republic of Korea or the US."

"We have limitations in infrastructures, institutions and policies, and we are also inexperienced, so our approach will be cautious and gradually changes as we learn more, without rushing. This is beneficial to both investors and Vietnam itself, and I hope investors could be understanding of this," PM Chinh said.

With that being said, PM Chinh underlined that Vietnam wanted to create trust and secure opportunities in business, and not cause trouble or worries for investors.

He said Vietnam was always open to foreign investors in emerging sectors such as securities, energy transition, digital transformation, healthcare, and biopharmaceuticals.

In the discussion with the CEO of Vietnamese carmaker VinFast, who is seeking to list on the US stock market in a couple of years with electric vehicle ambitions, PM Chinh said it would be important that the company respects US laws and business culture, closely watches the market and learns from the lessons it had from the domestic market and US partners, and commits to digital transformation and technology innovation.

He noted that the investment into EVs was a decision that meets the global trend, but the shift needed to be much more robust, with a focus on diversification of supply chains./.

PM visits New York Stock Exchange, holds roundtable with CEOs of world leading firms have 1466 words, post on en.vietnamplus.vn at May 17, 2022. This is cached page on VietNam Breaking News. If you want remove this page, please contact us.