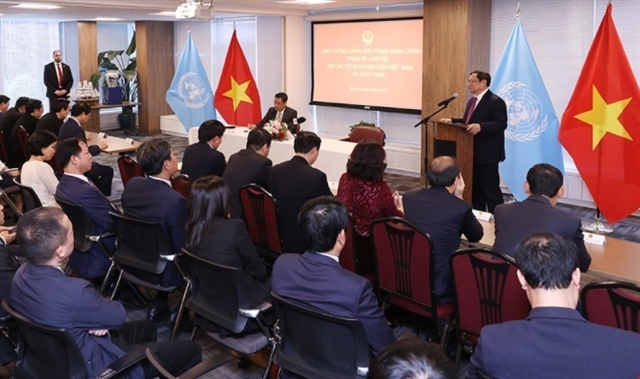 Prime Minister Phạm Minh Chính had a meeting with Permanent Delegation of Việt Nam to the United Nations in New York on May 15. — VNA/VNS Photo Dương Giang

NEW YORK — Officials and staff at Vietnamese representative agencies must keep abreast of global issues such as pandemic response, resource exhaustion, population aging, and climate change in order to fulfill their tasks, Prime Minister Phạm Minh Chính said on May 15 (US time) in New York.

He made the request during a meeting with the Permanent Delegation of Việt Nam to the United Nations (UN) as part of his trip to the US.

These issues require a global approach, he said, calling for the cooperation of countries and multilateralism, of which the most important mechanism is the UN.

At the same time, the mission should strictly follow the foreign policy of independence, for peace, friendship, cooperation and development, multilateralisation, and diversification of external relations.

According to the PM, it is essential to have a deep knowledge of the role of the UN and the role of Việt Nam in the UN. He asked the delegation to continue to further review the country's experience during the two tenures serving as a non-permanent member of the UN Security Council.

He also required the mission to pay more attention to strategic research in order to make timely policy recommendations to the Party and State when there are new developments in the world situation.

The Government leader asked the delegation to take care of the Vietnamese community, especially intellectuals and students, to enable them to contribute more to the country and the practical and effective relations between Việt Nam and US.

At the meeting, Đặng Hoàng Giang, head of the Delegation of Việt Nam to the UN, briefed the Government leader on the mission’s work and highlighted outstanding achievements in the Việt Nam – UN relations over the past 45 years since the country joined the world’s largest international organisation. — VNS

PM meets Permanent Delegation of Việt Nam to the UN have 432 words, post on vietnamnews.vn at May 16, 2022. This is cached page on VietNam Breaking News. If you want remove this page, please contact us.