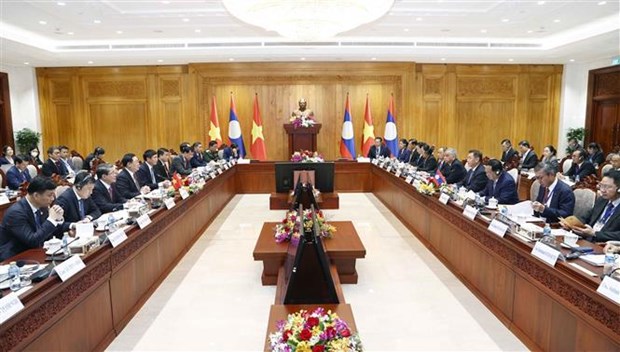 Hanoi (VNA) – National Assembly Chairman Vuong Dinh Hue and his host counterpart Saysomphone Phomvihan on May 16 held  talks following an official welcome ceremony for the former. Hue is now in Laos on an official visit.

The Lao leader spoke highly of the significance of the visit, the first by a key Vietnamese leader to Laos in the ” Year of Solidarity and Friendship ” between Viethnam and Laos. The year 2022 marks the 60th anniversary of the establishment of diplomatic relations between the two countries and the 45th anniversary of the signing of the Vietnam-Laos Treaty of Friendship and Cooperation.

For his part, National Assembly Chairman Hue congratulated the Lao Party, State and people for the great and comprehensive achievements they have achieved over the years, including the very important contributions by the Lao National Assembly.

He affirmed that Vietnam always wholeheartedly supports and accompanies Laos to overcome all difficulties and challenges, continue to develop sustainably, and have an increasing role and position in the international arena.

The two leaders emphasised that, in the face of current complicated developments in the international and regional situation, Vietnam and Laos clearly see the value of maintaining and cultivating the close, loyal and unique neighbourly relationship for the security and development of both.

The two National Assembly Chairmen expressed their delight at the good development of the cooperative relationship between the two countries and the two National Assemblies. Overcoming difficulties and obstacles caused by the COVID-19 pandemic recently, the two sides have made joint efforts to maintain regular visits, high-level contacts and bilateral cooperation mechanisms on all channels.

Even in the context of the pandemic, the two sides still maintained the momentum of trade and investment development. Two-way trade turnover in the first four months of 2022 reached 558.2 million USD, an increase of 20.2 percent over the same period in 2021. Vietnam maintains its position as the third-largest direct investor in Laos, with 214 valid projects and a total registered capital of about 5.33 billion USD.

They also consented to coordinate with the National Assembly of Cambodia to continue improving the process and procedures to upgrade the mechanism of cooperation among the legislatures of the three countries to the NA Chairman-chaired level. 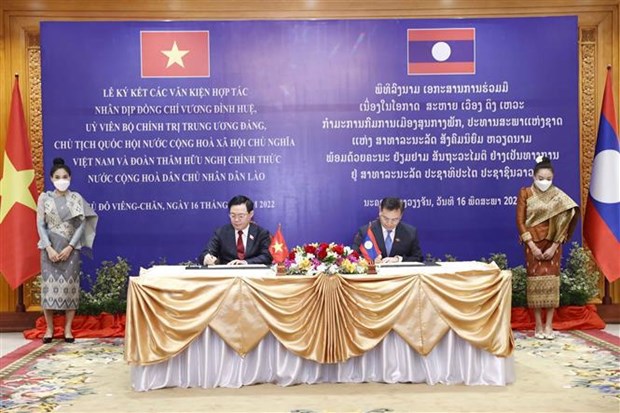 At the meeting, National Assembly Chairman Hue announced the presentation of computers, projectors and cameras to the Lao National Assembly Secretariat; and computers, books, and some teaching equipment to the Champasak Provincial Boarding School, the Friendship School and the Vietnamese Association in four southern provinces of Laos./.

NA leader holds talks with Lao counterpart have 894 words, post on en.vietnamplus.vn at May 16, 2022. This is cached page on VietNam Breaking News. If you want remove this page, please contact us.