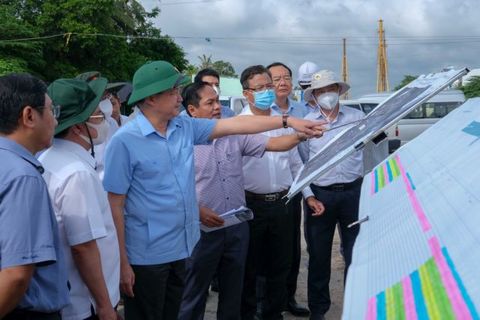 Deputy Prime Minister Le Minh Khai held a working session with eight cities and provinces in the Mekong Delta, focussing on supervision, mitigation and progress of public capital disbursement in 2022.

All though progress has been made, it was established that more can still be done as the province is still lagging behind the national average in terms of disbursement.

Attending the meeting on Monday afternoon were representatives of ministries and localities of Can Tho, Long An, Vinh Long, Hau Giang, Soc Trang, An Giang, Kien Giang, and Bac Lieu.

According to the Ministry of Planning and Investment (MPI), these eight localities were assigned a total capital of VND39.7 trillion (US$1.7 billion) from the 2022 State budget plan.

As of April 30, these eight cities and provinces have disbursed VND5.8 trillion, equivalent to 14.2 per cent of the plan. While the percentage was higher than the same period last year, it was still lower than the national figure of 15.08 per cent.

By the end of May, the estimated disbursement in the first five months of 2022 is expected to reach VND7.6 trillion, or 18.9 per cent of the plan, again lower than the national average of 20.61 per cent.

The Ministry of Planning and Investment said that slow disbursement progress is due to increasing prices of raw materials, bottlenecks in site clearance and compensation, time-consuming procedures, and slow processes in preparation, adjustment, and contractor selection. Inspection and supervision are also not prompt and frequent.

The ministry asked project management boards and head investors to develop specific plans for each project, with monthly internal updates to speed up the progress. They will also be responsible before the local People's Committees if there are delays in disbursement.

The provincial and municipal People's Committees are required to strictly follow the direction of the Government and Prime Minister. The committees' focus will be site clearance, transferring funding from projects with slow disbursement to those with good progress, public investment supervision, and handling violations.

In concluding the session, deputy PM Le Minh Khai requires localities to review and ensure the disbursement schedule, especially regarding the unallocated ODA funding with VND600 billion (US$25.9 million) in Can Tho City and VND10 billion (US$432,450) in Vinh Long Province.

He added that while not meeting the national average, there is still progress in disbursement work in these eight localities compared to the same period last year, which is a positive sign.

It is expected that these cities and provinces continue to mitigate the problems and accelerate disbursement to catch up with the rest of the country. They are also required to pay attention to the investment process and be more proactive in resolving issues of high material prices and ODA funding allocation.

Regarding proposals for several particular projects, deputy PM Khai required localities to closely coordinate with ministries, and departments to proactively come up with solutions for existing bottlenecks, and promptly report if problems exceed their authority.

During implementation, disbursement should be public, transparent, impartial, and objective, he added, with regular supervision and inspection according to the laws.

On Monday morning, the working team headed by deputy PM Le Minh Khai had conducted an inspection visit to several key projects in Can Tho City, including the Provincial Road 918 and the Can Tho City Oncology Hospital. — VNS

Mekong Delta sees progress on public capital disbursement, still behind national average have 739 words, post on bizhub.vn at May 17, 2022. This is cached page on VietNam Breaking News. If you want remove this page, please contact us.