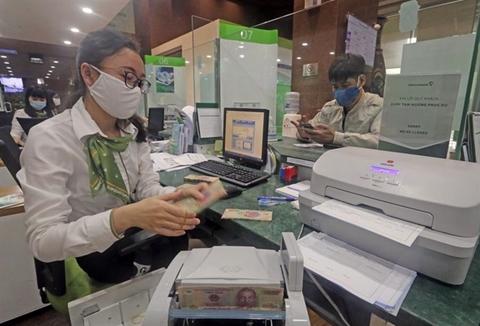 Benchmark indices were mixed on Monday as rising selling pressure in the afternoon session weighed on the market's sentiment.

The benchmark VN-Index on the Ho Chi Minh Stock Exchange (HoSE) reversed the morning course to fall further on Monday. It dropped 10.82 points, or 0.91 per cent, to 1,171.95 points. It recovered some losses in the morning trade on bottom-fishing demand.

Last week, the index had lost more than 11 per cent due to strong sell-off activities.

The market's breadth was still positive as 232 stocks climbed, while 224 stocks declined. Liquidity decreased sharply over the last trading day, with nearly 584.4 million shares traded on the southern bourse, worth VND14.6 trillion (US$631.3 million).

The index extended the downtrend as the rising selling force outweighed the bargain-hunting demand. The 30 biggest stocks tracker VN30-Index plunged by 8.68 points, or 0.71 per cent, to 1,215.08 points.

Data compiled by vietstock.vn showed that Vinhomes (VHM) lost the most on Monday, down 3.24 per cent in market capitalisation. It was followed by PV Gas (GAS) and Masan Group (MSN), with MSN posting a fall of 7 per cent – the maximum intraday loss on the southern bourse.

Sacombank (STB) was another large-cap stock hitting the floor price.

The index was also weighed by the poor performance of Becamex (BCM), Techcombank (TCB), Vingroup (VIC) and Sabeco (SAB). The stocks slipped at least 1.28 per cent.

Losses were capped by gains in some big stocks, including Vietcombank (VCB), Vietinbank (CTG) and Petrolimex (PLX).

During the trading day, investors poured over VND1.53 trillion into the northern market, equivalent to a trading volume of more than 76.82 million shares. — VNS

Market mixed on persistent strong selling force have 471 words, post on bizhub.vn at May 16, 2022. This is cached page on VietNam Breaking News. If you want remove this page, please contact us.