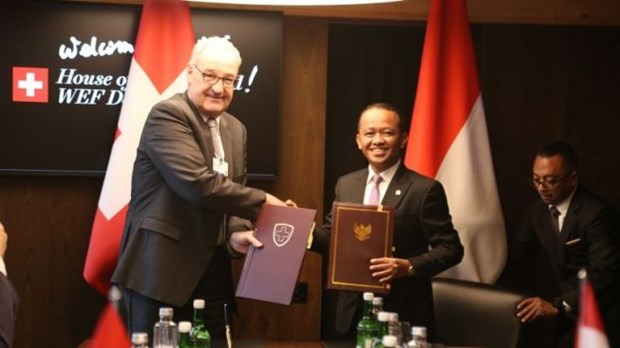 Jakarta (VNA) – After conducting seven rounds of negotiations which began in 2018, Indonesia and Switzerland have signed an Investment Promotion and Protection Agreement (P4M) to boost trade and investment between the two countries.

The signing took place on the sidelines of the World Economic Forum (WEF) 2022 underway in Davos, Switzerland.

The scope of the P4M includes guarantees on several issues, including non-discriminatory treatment, freedom to transfer or repatriate and options to solve disputes through international arbitration.

Indonesian Investment Minister Bahlil Lahadalia said the agreement was made to boost investments in both countries by providing legal protection and business certainty for Indonesian and Swiss investors.

He also said he hopes that the agreement can attract more investment from Switzerland to potential and priority sectors in Indonesia .

Swiss Federal Councillor Guy Parmelin said he expects the agreement can be well implemented to benefit both sides.

This P4M will replace the previous one which was signed in 1974 and ended in 2016. It will also complement the European Free Trade Association (EFTA) – Indonesia Comprehensive Economic Partnership Agreement (CEPA) signed in 2018 in which both countries are parties to.

According to Indonesia's statistics, Switzerland ranked 10th among its foreign investors with some 600 million USD poured into 281 projects in various areas, such as food and beverage, chemicals, pharmaceuticals, forestry and fishery./.

Indonesia, Switzerland sign bilateral investment agreement have 340 words, post on en.vietnamplus.vn at May 26, 2022. This is cached page on VietNam Breaking News. If you want remove this page, please contact us.