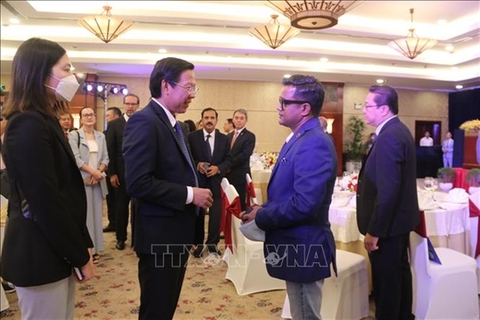 HCM City Chairman Phan Van Mai (second from left) speaks with representatives of businesses on the sidelines of a conference between city leaders and foreign investors last Friday. — VNA/VNS Photo

Rising labour and production costs have prompted some relocation but HCM City remains an appealing investment destination given its market size and speedy recovery, experts say.

Speaking at a meeting between city leaders and foreign investors late last week, Hirai Shinji, chief representative of the Japan External Trade Organisation (JETRO) in HCM City, said while more manufacturers were looking to relocate their production to other provinces because of rising labour costs and land rents in HCM City, the city remained a popular investment destination.

A recent JETRO survey attributed it to the city's great economic growth potential and market size, he said.

HCM City has been praised for its achievements in speedy post-pandemic economic recovery, he added.

Mary Tarnowka, executive director of the American Chamber of Commerce in Vietnam (AmCham Vietnam), said: "We continue to see a lot of interest from the US business community in the country, especially HCM City.

"Investors are looking for a fair, transparent, predictable regulatory environment that values innovation."

The city should continue to attract investment into high-value manufacturing, develop the service economy, especially the digital economy, as well as financial services and healthcare, she said.

It is also critical that the city builds a "complete" infrastructure for sustainable growth and train a workforce that is globally competitive, she added.

The recently launched direct flight service between HCM City and San Francisco will help promote bilateral trade and investment between Viet Nam and the US.

Allowing international tourism to resume will not only boost the local industry but also help speed up economic recovery, she said, reiterating that AmCham and its members are optimistic about the future here.

According to the Foreign Investment Agency, as of February 20, 2022, the US ranked 11th among 140 countries and territories investing in Viet Nam, with 1,145 projects worth over US$10.3 billion.

Jean Jacques Bouflet, vice president of the European Chamber of Commerce (EuroCham), recommended that the city improve its traffic infrastructure to enhance connection with surrounding localities.

He also said that "the fees for seaport infrastructure service in the city, applied from April 1, remain too high, worsening the cost burden, thus reducing the city's competitiveness."

Bouflet suggested that all city agencies, particularly its Department of Industry and Trade, use digital signatures for all administrative documents and processes.

Currently, not all processes are allowed to use digital signatures, though they have the same legal value in signing documents related to import-export activities and customs, he said.

The city should also develop policies to promote a green and energy-saving economy, he said, urging it to complete its socio-economic development plan for the 2021-30 period (with vision until 2045).

Phan Van Mai, chairman of the People's Committee, said the city was committed to promptly resolving all problems faced by businesses and investors.

"It will continue to improve its business climate, streamline administrative procedures and speed up digital transformation to build a digital government and digital economy."

From June, the city will use a digital platform to connect with foreign investors and regularly organise online meetings to call for investment, he added.

HCM City attracted $1.28 billion worth of foreign investment in the first four months of this year, up 12.2 per cent year-on-year, according to the Department of Planning and Investment. — VNS

HCM City growth remains an X factor: foreign investors have 647 words, post on bizhub.vn at May 23, 2022. This is cached page on VietNam Breaking News. If you want remove this page, please contact us.