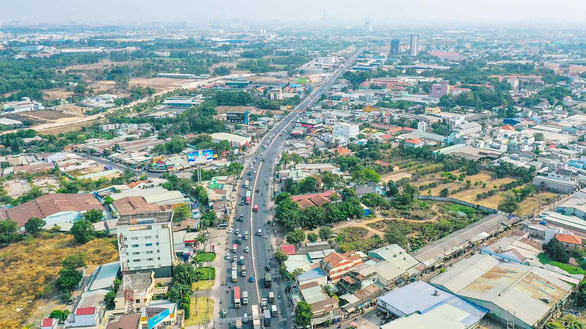 National Highway No. 13 in Bình Dương Province. HCM City will work with the province to improve traffic infrastructure to boost connectivity between themselves. — Photo tuoitre.vn

HCM CITY — HCM City and Bình Dương Province will work jointly on infrastructure projects to improve connectivity between them.

At a meeting between their leaders on May 13, Nguyễn Văn Lợi, secretary of the Bình Dương Party Committee, said the province and HCM City have been working together to contribute to the southern key economic zone.

"Infrastructure for connectivity between the two regions, especially roads and ports, is important. Bình Dương would like assistance from HCM City for important traffic projects."

Bình Dương wants the clearance of the city's Bình Triệu 1 and Bình Phước 1 bridges increased, and adjustments made to road junctions connecting the two places.

Phan Văn Mãi, chairman of the city People's Committee, agreed with Bình Dương's proposals and said relevant departments were looking into them.

The city has called for speeding up procedures for the HCM City – Bình Dương – Chơn Thành District (in Bình Phước Province) highway so that work on it can begin soon.

It has also asked for the province's co-operation in widening the Hà Nội Highway and National Highway No. 1, and funding from it for land compensation.

HCM City, Bình Dương discuss improvement in traffic connectivity have 331 words, post on vietnamnews.vn at May 14, 2022. This is cached page on VietNam Breaking News. If you want remove this page, please contact us.