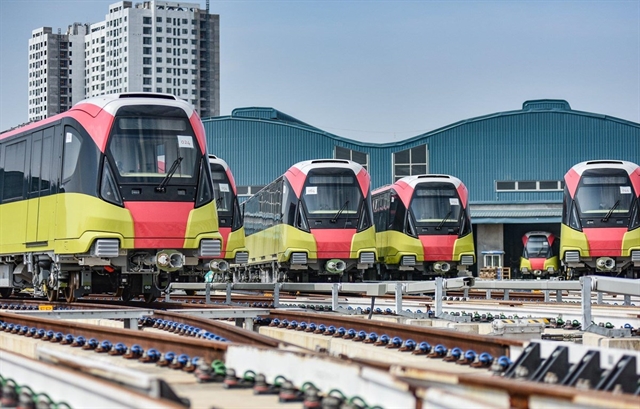 Trains of the Nhổn-Hà Nội Station metro line. The project is likely to be lagged behind schedule for five years. VNA/VNS Photo

Under the management board's proposal recently sent to the city's People's Committee, the Nhổn-Hà Nội Railway Station line will be put into operation in 2027, with the elevated section beginning in 2022.

The metro line will complete its final settlements in 2029.

Accordingly, the project's total investment has been adjusted to be VNĐ34.53 trillion ($1.48 billion), with an increase in investment of about VNĐ4.9 trillion ($211.2 million).

The management board said the increase in total investment was required because of changes in exchange rates and the need to readjust initial designs and technical requirements. Multiple delays to the project have led to changes to the original schedule.

The city's second metro railway project started in 2009 and was initially scheduled for completion in 2022. However, the construction progress has been delayed for multiple reasons.

A representative of the management board said the project was deploying all 10 main bidding packages.

The overall completion progress was about 74.36 per cent. Of that, the figures for the elevated and underground sections were 95.1 per cent and 33 per cent.

The management board said it was working with consultants and contractors to focus on the elevated section to put it into operation by the end of 2022 while continuing to handle problems to speed up the progress of the underground section.

It said the project was currently facing five major problems affecting the progress.

The impact of the COVID-19 pandemic has caused delays and interrupt in importing equipment and mobilising experts from Europe. This has led to prolonged equipment bidding packages and increasing costs.

The delay in site clearance and relocation of technical infrastructure has affected the project's progress. There are bidding packages that are 5-6 years behind schedule in handing over the site.

There are 50 buildings not located in the area of ​​land acquisition but still affected by the construction of the project. The law has no guidance on the compensation process for these households, so it takes time.

The extension of the contract period and additional costs due to the prolonged time has led to disputes with international contractors, making it difficult for Vietnamese management agencies to settle disputes.

There are also problems related to packaging contracts and issues with regulations, standards, unit prices, as well as prices of material and equipment.

Due to these problems, nine out of 10 bidding packages need to sign appendices to extend the implementation time and to seek additional costs due to prolonging the contract.

The trains are expected to operate at 35km per hour on average and 80km per hour maximum, the same speed as metros in Paris, Berlin and various cities in Asia. — VNS

Hà Nội’s second metro line project delayed further 5 years have 570 words, post on vietnamnews.vn at May 24, 2022. This is cached page on VietNam Breaking News. If you want remove this page, please contact us.