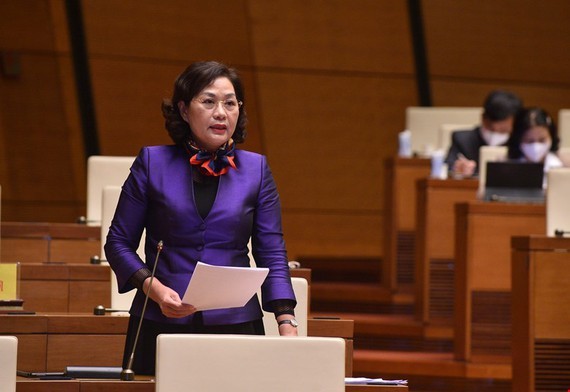 Governor of the State Bank of Vietnam Nguyen Thi Hong

After a large amount of bad debts in 2018 and 2019 had been successfully handled, this speed slowed down considerably, especially that in the form of customer self-payment, due to negative influences of the Covid-19 pandemic.

According to the Government, when Resolution No.42 expires on August 15, 2022, the bad debt settlement mechanism of CIs comes back to observe normal legal regulations, which might lead to unwanted prolonging of bad debt handling among CIs, particularly weak ones.

More importantly, since the pandemic as well as the Ukraine-Russia war is still rather complicated, discontinuation of encouraging policies in Resolution No.42 may result in the inability to mobilize national and international investors in joining this critical task and restructuring CIs.

The Government, therefore, proposed to maintain available mechanisms and policies on bad debt settlement in Resolution No.42, along with perfecting the current legal corridor for the task. It added that in the upcoming time, it will continue to request cooperation between the State Bank of Vietnam and related ministries, agencies, and the People's Committee of all provinces, cities in addressing possible trouble when implementing Resolution No.42.

Particularly, the mechanism to access information on collateral assets (CAs) should be completed; procedures to settle disputes related to obligations to hand in CAs or the right to handle CAs in court should be simplified; standards for debt valuation and instructions on handing over CA as evidence in criminal cases at the request of CIs should be developed; the priority order of tax payment for the proceeds (after deducting the costs of preservation and repairs) from the handling of a bad debt's CAs should be applied.

The Government suggested that in the long term, the National Assembly should assign the Government to direct the Vietnam State Bank to work with the Supreme People’s Procuracy, Supreme People’s Court, relevant ministries and agencies to prepare proper laws on bad debt settlement, to perfect the Credit Institution Law and any laws related to bad debt handling and CAs. They should be submitted to the National Assembly by the session at the beginning of 2023 at the latest.

Member of the National Financial and Monetary Policy Advisory Council Can Van Luc mentioned 6 reasons to extend Resolution No.42. He stressed the positive effects of the Resolution on bad debt handling procedures on improving the effectiveness of the institution, and the need to review legal regulations on trading and managing bad debts to increase the performance of these processes while saving costs for CIs and the economy in general.

Economy specialist Dr. Vu Dinh Anh shared that the handling of bad debts does not limit to those identified in Resolution No.42 but to the ones arisen after the Covid-19 pandemic since businesses are still having trouble even with frozen or rescheduled debts. This is still a huge challenge to all banks nationwide, and needs the cooperation of all ministries, agencies and localities to settle in order to improve credit quality.

The current bad debt proportions of CIs in major areas in Vietnam until December 31, 2021:

Extension for Resolution No.42/2017/QH14 on bad debt handling proposed have 795 words, post on www.sggpnews.org.vn at May 25, 2022. This is cached page on VietNam Breaking News. If you want remove this page, please contact us.