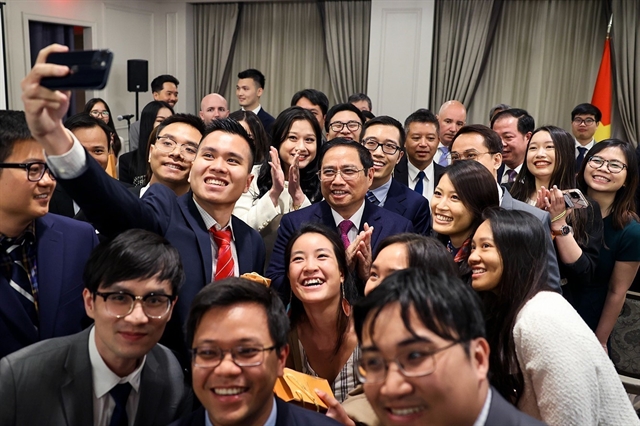 Prime Minister Phạm Minh Chính took a photo with Vietnamese students in New York, the US on May 15. — VNA/VNS Photo Dương Giang

NEW YORK — Prime Minister Phạm Minh Chính had a meeting with some overseas Vietnamese, (OV) intellectuals and young people in New York on May 15 (US time).

Representatives of the overseas community reported on their living, working, and studying situation as well as activities in New York, noting that the Vietnamese people here have always fulfilled the obligations of citizens, turned their hearts towards the homeland, and are delighted at the country's development.

Fielding questions about Việt Nam's measures for attracting foreign investment, PM Chính said Việt Nam has an appropriate policy, competitive edges, and a stable legal system that matches its international commitments. It is also stepping up administrative reforms, developing comprehensive infrastructure, forming a business climate suiting Việt Nam and global trends, and gearing up high-quality human resources for investors to come and operate in the country.

He underlined the Party and State's attention to the attraction of intellectuals to the public sector, and that favourable material and spiritual conditions are being created for those working in the public sector.

He called on young people who have the capability, will, and enthusiasm to engage in this sector, highlighting the welcome for anyone who wishes to work for the sake of themselves, their families, society, and the homeland.

Regarding the treatment of dual nationals, the PM said not only OVs but also foreigners in Việt Nam are all treated equally as domestic Vietnamese.

The Party and State have issued many guidelines and policies on OVs, consistently affirmed that OVs are an integral part of the community of Vietnamese ethnic groups, and created conditions for consolidating the great national solidarity and helping OVs gain a firm legal status, settle down in their host countries, and actively contribute to the homeland's development, he went on.

In terms of the promotion of Việt Nam's image, the PM said Việt Nam owns many proud features and despite a low starting point, it has never obtained the fortune, strength, stature, and prestige in the world like it does today after 35 years of reforms.

Therefore, OVs can be completely proud to introduce the country's images, he said, calling on each OV to be the most vivid representation of the homeland.

Noting that Việt Nam – US relations are growing well, PM Chính expressed his hope that OVs in the US will continue affirming the Vietnamese people's value, introducing images of Việt Nam, contributing to their families and homeland, and helping nurture the two countries' ties on the basis of mutual respect, equality, and justice for the sake of peace, cooperation and development. — VNS

Each overseas Vietnamese should be the country’s most vivid representation have 587 words, post on vietnamnews.vn at May 16, 2022. This is cached page on VietNam Breaking News. If you want remove this page, please contact us.